Assad almost resigned but Soleimani convinced him to continue

In an interview with a close friend of Soleimani who accompanied him on various visits to Iraq and Syria, Hasan Flark revealed that Bashar Assad was on the verge of giving up his reign in Syria. 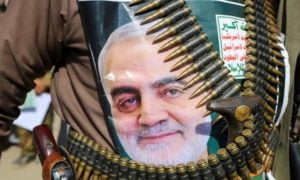 Assad almost resigned but Soleimani convinced him to continue

Syrian President Bashar Assad almost gave up power and requested asylum in another country, but Iranian Revolutionary Guard Corps Quds Force Commander Qassem Soleimani allegedly convinced him not to, according to a report released by the Jerusalem Center for Public Affairs.

Flark, beyond his role as special assistant to Soleimani, was also responsible for the Quds Force in Iraq and the force buildup in the country. He is said to have worked with Soleimani for 41 years, serving alongside him in the Revolutionary Guard prior to the outbreak of the Iran-Iraq War in 1980.

His comments came as part of a special interview on the 40th day after Soleimani’s assassination, where Flark also noted the “special” role that the Revolutionary Guards play in the region, which he exclaimed “is to support liberation movements, fight for justice and all those who are facing global arrogance and working for the prestige of Muslims.” Flark also confirmed the presence of Quds Force operations in Lebanon, Syria, Iraq and Yemen, in addition to Afghanistan and countries in Central Asia.

Flark also shared Soleimani’s attitude toward US military capabilities, viewing it as “a paper tiger, and that Americans have bird brains.” In the case of Iraq, he said that Soleimani instructed Iraqi officials in Baghdad and elsewhere regarding operational needs for countering ISIS, “thus saving Baghdad in less than 12 hours.”

He also spoke of Soleimani’s daughter, saying that, “Zainab was very close to her father and even accompanied him on many of his travels, including to Iraq, Syria and Lebanon, and even learned good Arabic and had close ties with youth tied to Lebanon’s Hezbollah.”

In a comprehensive interview with a close friend to Soleimani who accompanied him on various visits to Iraq and Syria, Hasan Flark revealed that Assad was on the verge of giving up his reign in Syria and intended to take refuge in another country, likely Russia. Flark, who acted as a consultant and special assistant to Soleimani, noted that the latter implored Assad to remain in his position, telling him that “the one and only option facing us is a victory for the resistance, and with the help of God, we will achieve it. ”

On 3rd of January a news spread in social media regarding Qasem Soleimani and AbuMahdi Mohandes who has died by a US drone strike near Baghdad Airport and this was the end of their lives. In social media, especially Iranian users, there was a chaotic situation, some called of “the general of... END_OF_DOCUMENT_TOKEN_TO_BE_REPLACED