Is this Iran’s ‘Chernobyl moment’?

Iran’s admission that it mistakenly shot down a passenger plane sent protesters pouring into the streets over the weekend. 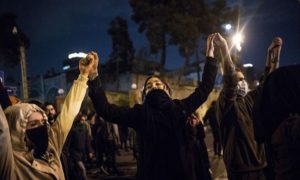 Is this Iran’s ‘Chernobyl moment’?

Though demonstrations were smaller on Monday and nearly outnumbered by riot police, some observers have already begun to wonder if this could be the beginning of the end for the current regime.

After days of denial and obfuscation, Iranian officials finally acknowledged early Saturday that its military had shot down a Ukraine International Airlines jet, killing all 176 people on board, many of whom were Iranian citizens.
Iranian Foreign Minister Javad Zarif blamed “human error” prompted by “US adventurism,” alluding to the escalating brinkmanship between Iran and the United States over the US killing of a revered Iranian commander, Qasem Soleimani.
On Tuesday, Iran announced that several people have been arrested in connection with the crash and President Hassan Rouhani said those responsible will be punished.
But the Iranian government’s tendency to point the finger at Washington, or other malicious foreign actors, for unrest at home is ringing hollow now. While the Trump administration has fomented a fractious atmosphere, it was not responsible for this accident.
Tehran’s admission appears to have re-ignited the anti-government sentiment that raged last year, despite the wave of nationalism followed Soleimani’s death earlier this month.
As crowds gathered in the capital Tehran for a candlelight vigil on Saturday to commemorate victims, protesters called for Supreme Leader Ayatollah Ali Khamenei to step down and for those responsible for downing the plane to be prosecuted. Familiar chants of “Death to America,” were traded for “Death to the dictator” and “Death to the liar.” In one video, demonstrators chanted, “Khamenei have shame. Leave the country.”
This reckoning is already being billed as Iran’s “Chernobyl” moment, an analogy to the way the 1986 nuclear disaster in the Soviet Ukraine “exposed all the incompetence, state deception and rot in that regime,” according to IranWire, a site for Iranian citizen journalists in the diaspora.”
But whether Iran’s grief and fury could lead to revolution is hard to tell.
Read more …

Iran arrested the UK ambassador for attending a vigil for crash victims Will Iran and the US clash in Lebanon and Syria?

On 3rd of January a news spread in social media regarding Qasem Soleimani and AbuMahdi Mohandes who has died by a US drone strike near Baghdad Airport and this was the end of their lives. In social media, especially Iranian users, there was a chaotic situation, some called of “the general of... END_OF_DOCUMENT_TOKEN_TO_BE_REPLACED