There is a lot more to last week’s decision by the U.K., France, and Germany to trigger the dispute resolution mechanism in the 2015 Joint Comprehensive Plan of Action (JCPOA) ‘nuclear deal’ with Iran than meets the eye.Global Sanctions 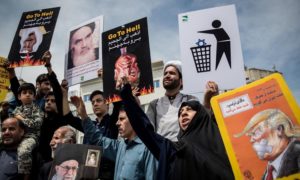 The countries – three out of the total six states that formed the P5+1 group that signed the JCPOA (the others being the U.S., Russia, and China) – are working in line with pressure from the U.S. “either to force Iran back to the negotiating table on the JCPOA or to exponentially increase its economic pain,” as a senior source who works closely with Iran’s Petroleum Ministry told OilPrice.com. “This time around, the U.S. is looking for Iran to make the decision: go back to the pro-West moderate policies of [President Hassan] Rouhani and all will be good or allow the IRGC [Islamic Revolutionary Guards Corps] to tighten its grip and all will be bad,” he underlined.

More specifically, whilst many of the European Union (E.U.) initiatives related to the impasse between Iran and the U.S. have proven to be largely ineffective in practical terms – most notably, perhaps, the payment mechanism to facilitate trade between the E.U. and Iran – the invoking of the dispute resolution mechanism has teeth. “That’s because it’s part of the JCPOA itself, rather than some E.U.-only thing, with the reason for its being used basically being statements out of Iran that it’s increasing its level of uranium enrichment, and the P5+1 estimates of what the real figures are,” said the Iran source. According to a comment last week from Rouhani, Iran is now enriching more uranium than it did before it agreed to the JCPOA in 2015, whilst Israel maintains its view that Iran has continued a secret nuclear enrichment programme throughout the entire time of the deal.

The reality is somewhere in between, according to senior sources in Iran spoken to by OilPrice.com last week. The JCPOA limits Iran’s stockpile of enriched uranium to 300 kilograms (kg), less than half of Iran’s stockpile before the 2015 JCPOA was signed.

On 3rd of January a news spread in social media regarding Qasem Soleimani and AbuMahdi Mohandes who has died by a US drone strike near Baghdad Airport and this was the end of their lives. In social media, especially Iranian users, there was a chaotic situation, some called of “the general of... END_OF_DOCUMENT_TOKEN_TO_BE_REPLACED