The assassination of Iranian Major General Qassem Soleimani of the Islamic Revolutionary Guards Corps’ (IRGC) Quds Forces has not affected Iran’s capabilities or activities in Syria, according to Israeli newspaper Yedioth Ahronoth. 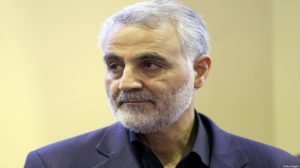 Columnist Ron Ben-Yishai – attempting to draw connections with Iran’s nuclear ambitions with “regional aggression” against the backdrop of US President Donald Trump pulling out of the 2015 Joint Comprehensive Plan of Action (JCPOA) – advised the Israeli army to “prepare for conflict with Iran itself” in addition to “its proxies to the north” in reference to the Lebanese Shia movement, Hezbollah who has entrenched itself along the Syrian-Israeli border on the occupied Golan Heights.

Yishai argues that the IRGC and its allies in Syria are preparing intelligence-gathering positions in order to target Israeli troops and civilians, including sniper positions and cited one such alleged attack in Quneitra province in southern Syria, which was foiled by the Israeli forces.

Despite Israel’s undeclared and uninspected chemical and nuclear weapons stockpiles, the writer claims that Iran is “also working to produce chemical weapons to replenish Syrian’s stockpile and arm Hezbollah in Lebanon”.

Syrian military airbases also continue to function as a drop-off point between Iran and Lebanon, with advanced missiles and technology being transferred by air.

As such, the author concludes that the IRGC’s abilities in the region were not hindered by the assassination of Soleimani at the beginning of the year. Soleimani’s successor, Esmail Qaani who is also a veteran of the devastating Iran-Iraq War in the 1980s, vowed in January “to continue martyr Soleimani’s path with the same force…and the only compensation for us would be to remove America from the region”.

Last week’s approval by the US State Department for a sale of military refuelling aircraft worth $2.4 billion is thought to increase Israel’s ability to confront Iran over its own territory, while last month, Israel Defence Minister Naftali Bennett, announced Tel Aviv’s plans to push Iran out of Syria within the upcoming 12 months.

On 3rd of January a news spread in social media regarding Qasem Soleimani and AbuMahdi Mohandes who has died by a US drone strike near Baghdad Airport and this was the end of their lives. In social media, especially Iranian users, there was a chaotic situation, some called of “the general of... END_OF_DOCUMENT_TOKEN_TO_BE_REPLACED