Jan 27, 2020 editorshataw IRGC, IRGC News, Politic, Quds Force, Slider Comments Off on The Threat From Iran Goes Beyond the Nuclear

As the Iranian people try again to rid themselves of their oppressive and homicidal regime, memories of a very special taxi ride reverberate with me. Iran 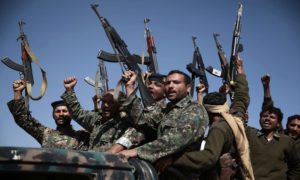 As I settled into the car that would take me to the airport, I just wanted to relax and look silently out the window, but after the usual greetings, it became apparent that the gentleman behind the wheel was quite refined in both his manner and his speech.

Intrigued, I began to ask him about how he became a driver, and he told me about growing up in Iran and how the Islamic revolution led to his coming to the United States. Soon after the ayatollah took over, he and his wife realized they had to leave. Given that he was Muslim, and not part of a persecuted minority like the Jews or the Baha’is, I asked what brought them to the decision to leave so quickly.

His response was immediate and unforgettable. It was his daughter. There was no doubt that her life in Iran would be unbearable, that she would never be more than a second-class citizen and never be able to fulfill her dreams. That is why they left Iran, their home for countless generations, and — although he did not mention this — he sacrificed his professional status for her future.

I think of this elegant gentleman whenever I see the protests in Iran. He understood the nature of the Iranian regime. And this memorable meeting reinforced the fact that none of us should use the word nation to describe both the people and the state of Iran. They are and continue to be, for the most part, completely different entities, and we need to empower the Iranian people, whenever possible, so they can rid themselves of their genocidal rulers. A vivid reminder of this division was clear this past Sunday, when thousands of students protesting the shooting down of the Ukrainian plane deliberately chose to avoid stepping on the American and Israeli flags the government had painted on the street. Instead, they chanted that America is not their enemy. This, while the official policy of the Iranian government continues to call for the destruction of both the United States and Israel.

On 3rd of January a news spread in social media regarding Qasem Soleimani and AbuMahdi Mohandes who has died by a US drone strike near Baghdad Airport and this was the end of their lives. In social media, especially Iranian users, there was a chaotic situation, some called of “the general of... END_OF_DOCUMENT_TOKEN_TO_BE_REPLACED