The entire event prompts the question of how long the Iranian regime can carry on with suppressing protesters, and how this strategic operation might backfire. 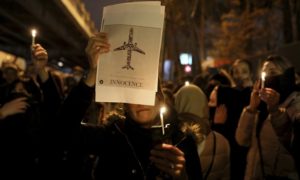 The early hours of January 8 were stressful for the international community as Iran fired ballistic missiles at the Ain al-Assad military base near Baghdad and targeted Erbil in Iraqi Kurdistan. Although it was not an entirely successful operation, as five out of 22 missiles did not explode, the event created global anxiety, and even more among the Iranian officials.

As the world observed an unprecedented escalation between Iran and the US, Tehran was scrupulous not to cause any casualties on the American side, even though the Iranian media were fed by the regime propaganda claiming 80 Americans were killed during the attack.

On the one hand, the Iranian regime is not an amateur incapable of understanding the flow of information in a modern world. On the other, the Iranian people are not ignorant in regard to learning the facts about the events.

After the assassination of Qasem Soleimani by the US, the Iranian regime and the supreme leader promised “hard retaliation.” The Quds Force general was way more important than only a military commander. He shaped and implemented the Iranian regional policy throughout the Middle East using the Shia proxies that were more loyal to the general than to Tehran.

The supreme leader shed tears over Soleimani’s coffin, and the hardliners in Iran demanded retaliation. However, a flimsy attack in which five unexploded missiles out of 22 and an intentional zero casualties on the American side would not satisfy these hardliners.

The Iranian regime had two choices: first, to carry out further attacks on American bases in which Tehran did not want to, as it was clearly mentioned in the IRGC statement shortly after the missile attacks; and second, to find an alternative to redirect the crisis narration into a matter that Tehran could handle easier, or at least, be more familiar with.

On 3rd of January a news spread in social media regarding Qasem Soleimani and AbuMahdi Mohandes who has died by a US drone strike near Baghdad Airport and this was the end of their lives. In social media, especially Iranian users, there was a chaotic situation, some called of “the general of... END_OF_DOCUMENT_TOKEN_TO_BE_REPLACED