Arrest of Hamid Sadr Ghabadi, an employee at Evin prison

According to news sources, on February 23rd, agents from the Intelligence Ministry detained Seyed Hamid Sadr Ghabadi who is an employee at Evin prison. Per the reports, Ghabadi was arrested without warning on Saturday as he was leaving his place of work. He was transferred to an undisclosed location. 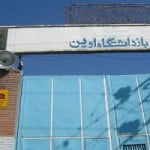 and conducted a massive search of his home while being aggressive and rude towards his family. The agents confiscated his personal items including his computer, camera, books and pamphlets.

There has been no information provided yet regarding the reason for the arrest or the whereabouts of Hamid Sadr Ghabadi. According to the news sources, Ghabadi was in charge of record keeping and was working on registering profiles for new incoming prisoners at Tehran’s Evin prison.