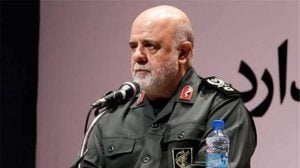 The AsrIran newspaper reported that the choice of Brigadier Masjadi as an ambassador to Tehran in Baghdad was based on a ‘consensus’ between Gen. Qassim Soleimani (Commander of the Iranian Revolutionary Guards) and Foreign Minister Mohammad Javad Zarif.

Masjadi, who serves as the top commander adviser of Gen. Qassim Soleimani, is famed for his comments about the battle of Fallujah against ISIS, where he said in last May that “the involvement of the Iranian Revolutionary Guard in the battle of Fallujah was in order to preserve Iran’s status as a Shiite center in the world. We are defending Iran and its borders”.

In a statement made in last May, Brigadier Masjadi revealed the role of the Quds Force in maintaining the regime of Bashar al-Assad saying: “Without the interference of the Quds forces in the last moments, the Syrian regime would have fallen in the hands of the Syrian opposition.”

While attending a memorial service for the fighters of the Revolutionary Guards who died in Syria, Masjadi maintained that “after the Syrian armed opposition took control of most areas in Damascus and its countryside, Syria was on the verge of completely falling down. We finally intervened at the last minute and saved Damascus and the Syrian President Bashar al-Assad of an inevitable downfall.”

The adviser commander of Iran’s Quds Force claimed that “all the armed movements in Syria have a unified goal of eliminating Shia, Shiites and Alawites in Syria, in addition to their hostility against the shrine of Zaynab Bent Ali.

This is the indoctrination propagated by Iran and its allies to accuse the Syrian opposition of extremism.

Masjadi explained the importance of the survival of al-Assad’s regime for Iran, disclosing: “The fall of the Syrian government in Damascus at the hands of the Syrian armed opposition would mean disrupting the link between Iran and Hezbollah in Lebanon. In this case we believe that Hezbollah will be besieged, its position would be very weak, and will experience hardship in Lebanon. “

The appointment of a Revolutionary Guard leader as ambassador to Tehran in Baghdad comes days after the appointment of the Iranian diplomat, Jawad Tark Abadi, as ambassador in the Syrian capital Damascus, to succeed former Ambassador Mohammad Reza Shibani, who finished his duties three months ago. The post remained vacant because of differences between the Iranian foreign ministry and Revolutionary Guards who wanted to impose someone they trusted.

The Iranian Revolutionary Guard, the Ministry of Intelligence and the Foreign Ministry share the responsibility of designating ambassadors. The revolutionary Guard believes that they should have a saying in the selection of ambassadors in Iraq, Lebanon, Syria and Yemen due to their role in managing Iranian interventions in these countries.