A number of leaders of Iraq’s Popular Mobilization Forces (PMF) have told Iran’s Fars News Agency (FNA) that their forces will play a leading military role in “liberating” 3,000 square kilometers of Islamic State-held areas in western Mosul. They claimed their participation in the military operations would both minimize civilian casualties and speed up the ouster of “terrorists” from the region. 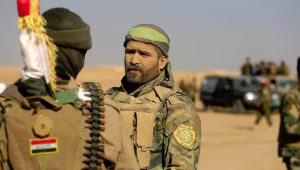 “The participation of Popular Mobilization [Forces] in the next operations to liberate Mosul is certain. But so far, the timing and operational roles of the force have yet to be determined,” Karim al-Nouri, the spokesman for the powerful Iran-backed Badr Organization, told FNA, a news outlet affiliated with the Islamic Revolution Guards Corps (I.R.G.C.). Nouri added that after seizing Tal Afar airbase and other regions in western parts of the Nineveh Province, the PMF forces are now ready to participate in the next phase of operations in the “right bank” of Mosul.

Based on interviews with PMF leaders, FNA added that the militia groups’ role will not remain confined to western Mosul but will expand to other Iraqi regions in the near future. Hassan al-Sari, the commander of Saraya al-Jihad, another Iran-backed unit within the PMF, told FNA that the militia forces will also take part in the upcoming military operations in al-Hawija District of Iraq’s Kirkuk Province.

Comment: Despite mounting concern by Sunni Iraqi lawmakers and some regional leaders, the Iran-supported militia groups are playing an increasing role in military operations across Iraq. The militia forces’ leading role in predominantly Sunni-populated western Mosul, particularly in Tal Afar, a city about 40 miles west of the city of Mosul, has raised alarm among some Iraqis and regional countries, especially Turkey, that the Iran-backed sectarian groups may engage in revenge killings and other human rights abuses once the Islamic State is ousted.

The PMF consists of militia forces largely from Shiite but also other Iraqi ethnic and religious groups. While some PMF units are Iraqi nationalists and follow Iraq’s top cleric Grand Ayatollah Ali Sistani, many prominent groups within PMF have close ties with Qassem Suleimani, the head of the IRGC’s elite Quds Force. What makes Sunnis particularly worried is that, despite PMF’s diversity, it is the Iran-backed militia units within the PMF that are playing the most prominent role in western Mosul. While PMF leaders claim their participation in military operations reduces civilian casualties, international human rights organization have repeatedly documented acts of extrajudicial killings by some militia units in several Iraqi cities in the past.
Source: MEI – Iran-Linked Militia Groups Playing Increasing Role in Mosul and Kirkuk Military Operations