IRGC, Basij leaders, and other repressive state agencies directives to the state television on what and how to broadcast reports to propagate repression, terrorism, export of extremism, and warmongering.

The collection of documents obtained from inside the Iranian state-controlled media corporation (IRIB) shows that not only the main operators of the organization are entirely affiliated with the IRGC and Khamenei’s offices, but also the leaders of Khamenei’s repressive agencies often communicate their instructions directly by sending video clips to be broadcast. For that reason, the Iranian people refer to the state propaganda machine by chanting, “Shame on the state radio and television.”

The Security and Counterterrorism Committee of the National Council of Resistance of Iran (NCRI) is publishing parts of such documents that are related to the period between November 2-27, 2022. broadcast reports 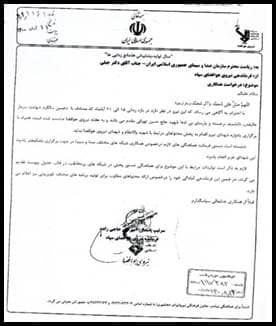 “On November 6 – 12, which coincides with the 10th anniversary of the martyrdom of … Haj Hassan Tehrani Moghaddam and has been recognized as the ‘Aerospace Force Week,’ in addition to holding a memorial, we need content related broadcasts about the honorable martyr and other Aerospace Force martyrs.

It is appropriate to order the necessary collaborations of different IRIB networks to hold a more glorious memorial service for these dear martyrs. It should be noted that a table of productions related to this directive is attached to coordinate the broadcast order in networks with higher viewership. Hajizadeh also states his readiness to provide the desired content for the production of various television programs.”