Dec 14, 2018 Nuclear Fille, Politic, Slider Comments Off on Iran’s Rouhani warns West will be flooded with drugs after US sanctions

President Hassan Rouhani on Saturday warned western countries that they will face a massive influx of drugs if Iran becomes weakened by US sanctions. 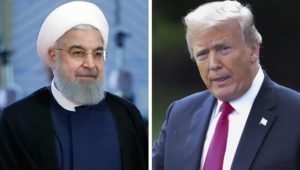 In remarks broadcast on state TV, Mr Rouhani said a weakened Iran would be less able to fight drug trafficking.

“Weakening Iran by sanctions, many will not be safe,” he said. “Those who do not believe us, it is good to look at the map.”

Iran lies on a major drug route between Afghanistan and Europe and the Arabian Gulf states. Afghanistan is the world’s largest producer of opium with its Helmand Province being the biggest opium-producing region. Opium is the raw material for heroin and Afghan farmers harvest about 80 per cent of the world’s supply, according to UN reports.

Iran’s economy is reeling after the US reimposed sanctions lifted under Tehran’s nuclear deal with world powers. US President Donald Trump withdrew from the deal and began restoring sanctions. Mr Rouhani called the US sanctions as “economic terrorism”.

Iran pays a heavy price to fight drug trafficking, with a number of border guards killed in fighting drug smugglers every year. Every year, the country burns about 100 tonnes of seized narcotics.

Iran has also complained about accusations that it violates human rights by executing convicted drug smugglers, which makes up 73 per cent of executions in Iran.

In 2013 alone, Iran spent more than $26 million (Dh95.5m) to dig canals, erect walls and embankments, create new outposts and set up barbed wire along its 2,000-kilometre border with Afghanistan and Pakistan, according to government statistics.

On 3rd of January a news spread in social media regarding Qasem Soleimani and AbuMahdi Mohandes who has died by a US drone strike near Baghdad Airport and this was the end of their lives. In social media, especially Iranian users, there was a chaotic situation, some called of “the general of... END_OF_DOCUMENT_TOKEN_TO_BE_REPLACED