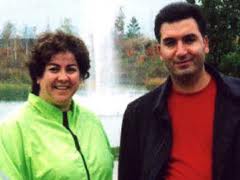 The wife of a Canadian man on death row in Iran is planning to travel to the country in the next couple of weeks to attempt to have him released.

Iranian officials at the embassy

in Ottawa have told Antonella Mega that it would be “helpful” if she goes to Iran in person.

Mega’s husband, Hamid Ghassemi-Shall, 42, was arrested in 2008 while visiting family, and was later charged with espionage.

Ghassemi-Shall was sentenced to death in 2009 and an Iranian court rejected an appeal.

He is awaiting execution in Tehran’s notorious Evin prison, where another Canadian, photojournalist Zahra Kazemi, was beaten, raped and killed in 2003.

Iranian officials haven’t been clear whether Mega will be permitted to see her husband when she arrives in Iran, but she remains hopeful and will go as soon as her visa is approved.

Mega also says she is thankful for the Canadian government’s calls to the Iranian government to grant clemency to Ghassemi-Shall.

On Wednesday the minister in charge of consular affairs, Diane Ablonczy introduced a motion in the House of Commons.

The motion says, “That this House urgently appeals to the Government of the Islamic Republic of Iran to grant clemency to Hamid Ghassemi-Shall on compassionate and humanitarian grounds, calls for his release and return to his family and spouse in Canada, and urges Iran to reverse its current course and to adhere to its international human rights obligations.”

It was adopted unanimously by all parties in the House of Commons.

Officials in Canada, Turkey and Brazil have protested Ghassemi-Shall’s sentence.

Mega says she remains hopeful and appreciative of the help of everyone who has come forward, but adds it has been hard to help her husband remain optimistic.

The last time she spoke with her husband was nearly three weeks ago.

The Radicalization of the Shia Community in Italy: A Threat That Should Be Addressed