Jun 14, 2019 IRGC, Politic, Quds Force, Slider Comments Off on Oil tanker attacks will inflame conflict between the US, its allies and Iran

The explosions, on a vital passageway for the world’s oil supply, may prove Trump’s policy of coercion has backfired 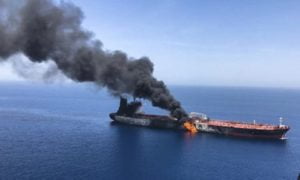 The explosions were bigger and the damage more extensive. But the message and its means of delivery have some similarities.

Thursday’s attacks on two oil tankers in the Gulf of Oman caused jitters in global markets and unease across a region that has been bracing for conflict throughout much of the year. As with the earlier attacks on 12 May, news of the latest strikes was again broken by media outlets aligned to Hezbollah in Lebanon and Iran, who broadcast images of the attacks within minutes of them taking place.

Pictures of both ships ablaze spoke volumes about what is at stake in one of the world’s most strategic waterways, as a regional player withering under ever tightening sanctions stares down a global superpower determined to impose its will.

Even the hint of obstruction in the strait of Hormuz, where ships pass each other like cars on a four lane motorway, is enough to upset oil markets. Frequent, and seemingly random, bombings of tankers, however, takes fears over energy security to levels not seen since the tanker wars, a byproduct of the Iran-Iraq war of the mid-80s, which sunk or damaged 543 ships in nearby waters and caused three years of turmoil in energy markets. By Thursday afternoon, two large shipping companies had suspended bookings from the Gulf oil ports.

The standoff between Iran and the US, which has brewed over the course of Donald Trump’s administration, has typically played out on terra firma. In Iraq, Iran has consolidated its presence at the expense of Washington, which has little to show for its efforts to reorientate the country in its favour. In Lebanon Iran’s near dominance of the political space has taken place at Saudi Arabia’s – and Washington’s – expense.

US reportedly eyeing Iran after attack on two tankers near the Strait of Hormuz Russia, Iran not natural allies despite shared goals

On 3rd of January a news spread in social media regarding Qasem Soleimani and AbuMahdi Mohandes who has died by a US drone strike near Baghdad Airport and this was the end of their lives. In social media, especially Iranian users, there was a chaotic situation, some called of “the general of... END_OF_DOCUMENT_TOKEN_TO_BE_REPLACED