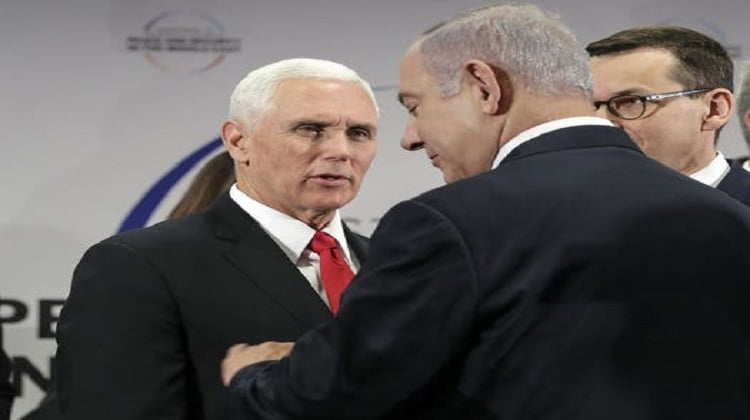 The Trump administration lashed out at some of America’s closest traditional allies Thursday, accusing Britain, France and Germany of trying to bust U.S. sanctions against Iran and calling on European nations to join the United States in withdrawing from the Iranian nuclear deal.

In an unusually blunt speech to a Middle East conference in Poland, U.S. Vice President Mike Pence slammed the three countries and the European Union as a whole for remaining parties to the landmark 2015 agreement after President Donald Trump withdrew from it last year and re-imposed tough sanctions on Iran.

The harsh criticism threatened to further chill U.S.-European ties that are already badly strained on many issues, including trade and defense spending. And it underscored the stark two-year trans-Atlantic divide over Iran that manifested itself again ahead of the Warsaw conference co-hosted by the U.S. and Poland.

France and Germany declined to send their top diplomats to the ministerial-level meeting. EU foreign policy chief Federica Mogherini also stayed away due to concerns it would become an anti-Iran vehicle. Britain, France and Germany, along with the rest of the EU, continue to support the nuclear deal as the best way to prevent Iran from developing atomic weapons.

At the close of the conference, Secretary of State Mike Pompeo and his Polish counterpart Jacek Czaputowicz both noted differences of opinion over policies toward Iran. But, they said all participants agreed on the threat posed by the country, which is celebrating the 40th anniversary of the Islamic Revolution this week.

“There was not a defender of Iran in the room,” Pompeo said, adding that the U.S. and Europe were still capable of working together on the issue.

IRGC Commander: “if our nuclear facilities are attacked, the enemy will not be left alive”

Iran arrests mother of executed brothers in Isfahan after their funeral