Qasem Soleimani’s a War Criminal in the Syrian Civil War

Posted By: on: December 17, 2016In: Intelligence Ministry
Print Email

1.   Major General Qasem Soleimani (Haj Qasem) was appointed commander of the Iranian Islamic Revolutionary Guards Corps’ (IRGC) Qods Force (“Jerusalem Force”) during the period between September 1997 and March 1998. It is one of five IRGC arms, the strongest security force in Iran and the regime’s main prop. It is an elite unit thought to be composed of several thousand operatives. The Qods Force was established in 1990 as an organized, operational framework for the extensive activities Iran conducts to export the Islamic Revolution to other countries. Over the years the Qods Force has become the spearhead of Iran’s efforts to consolidate its regional power and promote its strategic objectives through terrorism and political subversion.

Qasem Soleimani’s a War Criminal in the Syrian Civil War

2.   The Qods Force is not an organic military unit but rather an organizational framework which has general headquarters, designated commands that deal with various covert areas of specialization, and regional administrations responsible for specific geographical areas. It has great prestige with the upper echelons of the Iranian leadership, enjoys access to many resources, and has the ear of Supreme Leader Ali Khamenei. The Qods Force influences the strategic-defense decision-making processes in Tehran, especially decisions concerning sensitive external issues related to Iran’s regional activities. To fight Iran’s various enemies in the Middle East and around the world the Qods Force uses proxies, providing them with military support, funding and guidance.

3.   Qasem Soleimani is the second Qods Force commander. He replaced Ahmad Vahidi, who served as defense minister under Mahmoud Ahmadinejad (2009-2013). For many years Soleimani kept a low media profile and was almost unknown to the Iranian public (although he was mentioned in connection with Iranian subversion and terrorism beyond the borders of Iran). He was designated on the US foreign terrorist organizations list after the attempted assassination of the Saudi Arabian ambassador to Washington in 2011.[1] That and the key role he played in strengthening Iranian influence in the Middle East during the regional upheaval (the so-called “Arab Spring”), significantly increased his media exposure both in Iran and abroad. As a result, he was mentioned as a possible candidate for future high political office in Iran.

4.   The far-reaching political changes in the Arab world in recent years created new opportunities for Iran to expand its influence in the Middle East. When the regional upheaval began, Iran represented the changes in the Arab world as an expression of an Islamic awakening inspired by the Islamic Revolution, and as the beginning of a transformation that would alter the face of the region. Since then, under Qasem Soleimani’s command, in orderto advance Iranian hegemony in the Arab world the Qods Force has become the main instrument used to exploit the new opportunities presented by the collapse of national states and the weakness of the Sunni Arab states that oppose Iran’s regional influence.

5.   However, in addition to the new opportunities, the dramatic events in the Middle East presented significant risks and challenges for Iran. It quickly became apparent to the Iranian leadership that Arab-world politics were more complex than previously supposed and that it was not entirely certain the Islamic Republic could direct the regional upheaval or serve as a role model for the Arab Sunni states. The Shi’ite uprising in Bahrain in 2011 increased Arab concerns over Iran’s increasing influence, and deepened existing Sunni Arab suspicions of Iran. The civil war in Syria (Iran’s most important ally in the Arab world) was another serious challenge for Iran and threatened to undermine the coherence of the Iranian-led “resistance front.” ISIS’s military successes were a strategic challenge for Iran, which it met by sending Iraq and Syria weapons and advisors, the most important of whom was Soleimani. The American-led international campaign against ISIS made the challenge more formidable and complicated the situation in Iraq and Syria for Iran.

6.   To cope with the regional upheaval, Iran provided the Qods Force with resources in an effort to exploit opportunities and to minimize risks. In the new Middle East that arose, behind the scenes (and during the past year on center stage) Qasem Soleimani began pulling the strings of Iran’s subversive, military and political activities. That made him one of the most influential figures in formulating Iranian foreign policy, and his influence can be expected to grow in the wake of Iran’s nuclear deal. In shaping Iranian regional foreign policy, he has become even more influential than the foreign minister. He is closely connected to the political leadership, who regard him as an authority on the dramatic developments unfolding in the Middle East. For example, on two occasions during the past two years (September 2014 and September 2015) Soleimani was invited to appear at the Assembly of Experts (a powerful council, responsible for electing, removing and overseeing the activities of the Supreme Leader, and with the power to decide if he is fulfilling his role properly).

7.   Qasem Soleimani’s approach to developments in the regional arena reflect the basic concept of the Iranian regime, which regards the West, especially the United States, as the source of all the evil in the world and the main threat to Iran’s national security and vital interests. Its hostility towards the United States and Israel (“the Zionist regime,” considered an American proxy) is still at the core of the Iranian ideology, even after the nuclear agreement. According to Qasem Soleimani, whose views accurately reflect those of Supreme Leader Ali Khamenei, Iran spearheads the struggle against the United States and its regional proxies. Therefore, ensuring the might of Iran, the Qods Force and Iran’s allies in the “resistance front” is necessary to foil American efforts and turn Iran into the regional hegemon.

8.   According to Qasem Soleimani, Iran has had considerable success in its dealings with the United States and its Middle Eastern allies. Speaking recently at a conference of IRGC commanders in Tehran, he claimed that the Middle East and Western Asia had been greatly influential in the “collapse” of America’s status as a world power and that during the past twenty years Iran had inflicted great damage on everything that made America a power. He noted four ways the United States was trying to rehabilitate its status in the Middle East. They included exploiting the UN and other agencies, such as human rights organizations; strengthening the “Zionist regime;” weakening Iran; and keeping the struggles in the Muslim world alive in order to increase their dependence on the United States. He claimed that American policy regarding ISIS and other radical Islamist organizations was to exploit them to promote its own interests, but not to destroy them. The United States wanted to preserve these organizations so that Middle Eastern countries would become more dependent on it (Mehr News Agency, September 16, 2015).

9.   Using Qasem Soleimani’s strategies, Iran strengthened its regional status and influence during the upheaval. Iranian involvement in Iraq halted ISIS’s advance, its support for Assad prevented the Syrian regime from collapsing, and its support of the Houthi rebels in Yemen gave them an advantage over the Yemeni government. On the other hand, both Iran in general and Soleimani in particular also had failures. Despite Iranian support, including of Hezbollah and the Syrian army, the Syrian regime is flailing, which necessitated direct Russian military involvement. The fighting between the Iraqi administration and the Iranian-supported Shi’ite militias on the one hand, and ISIS on the other, is at a stalemate, and Iran’s Houthi allies in Yemen recently suffered serious setbacks. That showed the limits of Iran’s force in those arenas and the problematical nature of a strategy relying on the use of Iranian proxies throughout the Middle East.

10.   In view of the Syrian regime’s distress during the past year, manifested by the threat posed by Al-Nusra Front to Latakia and other Syrian regime strongholds along the coast, in the middle of September 2015 Iran increased the number of its forces in Syria from several hundred to several thousand. The reinforcements, who came from the IRGC and IRGC-operated militias, were sent to support the Syrian army in its offensive in northern Syria, which began on October 7, 2015. The Hezbollah-affiliated Lebanese daily newspaper Al-Akhbar reported that on October 11, 2015, Qasem Soleimani arrived in northwestern Syria and commanded the Syrian army offensive with the support of the IRGC (Al-Akhbar, October 13, 2015).

11.   The IRGC involvement in the fighting in Syria has brought Qasem Soleimani into the limelight. The social networks posted current video and pictures of Soleimani (apparently from the region of Latakia) showing him briefing Hezbollah fighters. His arrival in Syria at the same time as the Iranian forces would seem to indicate that the efforts of the Qods Force in general and Soleimani in particular are being diverted from Iraq to Syria. The Syrian regime’s strategic distress is forcing the Qods Force, under Soleimani’s command, to concentrate its efforts to help the Syrian army repel the rebels in northwestern Syria (in the regions of Homs, Hama, Idlib and Aleppo), with Russian aerial support. So far the Syrian offensive has had difficulties and IRGC fighters in the front lines have suffered serious losses (more than thirty dead, among them three senior officers with the rank of colonel or brigadier general). 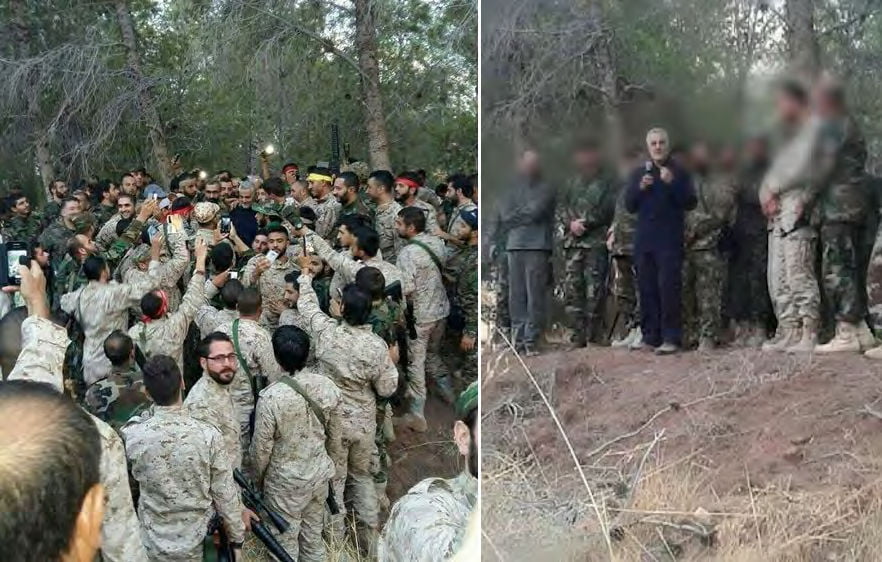 12.   In recent years Qasem Soleimani has become very powerful in the internal Iranian political arena. His continued service in the IRGC, the support he receives from Supreme Leader Ali Khamenei, his close relations with the Iranian political leadership, his commitment to the Islamic regime and the ideology of the Islamic Revolution, and his public image as a national hero all strengthen his position and might help him in the future if he decides on a political career. However, connections, experience and talent do not necessarily ensure political success in Iran. There are several past examples of senior IRGC commanders who tried to go into national politics and did not succeed (for example former IRGC commander Mohsen Rezaei and Tehran Mayor Mohammad Bagher Ghalibaf).

13.   This study focuses on Qasem Soleimani and his activities during the past two years with regard to overall Iranian policy and the Qods Force. It is the continuation of two previous Intelligence and Terrorism Information Center (ITIC) studies: “Using the Quds Force of the Revolutionary Guards as the main tool to export the revolution beyond the borders of Iran,” issued April 2, 2007; “The Quds Force, an elite unit of the Iranian Revolutionary Guards, spearheads Iran’s global terrorist campaign,” issued August 7, 2012; and other ITIC documents that examined the Qods Force’s subversive and terrorist activities in the Middle East and around the globe under the command of Qasem Soleimani.

14.   The study is based on a wide variety of open source material issued in recent years by Iranian, Arab and Western media, and by the social networks. While they provide a large quantity of information about Qasem Soleimani’s activities and the operations of the Qods Force, there are still some gaps, which have been noted.

15.   The study is divided into nine sections:

4)  Section 4: Qasem Soleimani’s involvement in the Palestinian arena and Israel

9)  Section 9: Possible lifting of international sanctions on Qasem Soleimani in the wake of the nuclear agreement

Imam Khameni: Iran to Act If US Renews Sanctions

Denmark accuses Iran of political ‘assassination plot’ on its soil