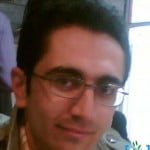 Student activist Shahin Fazli was arrested at his house in Tabriz and was released on bail after 95 days of detainment.

According to the Human Rights House of Iran, he was sentenced to 6 months in prison by collabeartng with anti-regime groups and anti-regime propaganda.

On Monday, he appeared at Tabriz Court to begin serving his sentence.