The imam sends a satrap 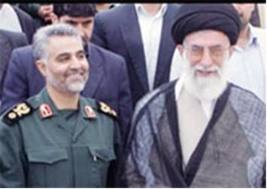 Asharq Alawsat – After months of hand wringing and, perhaps, internal squabbles, Iran appears to have decided to play a direct role in shaping the outcome of the struggle over Syria’s future.

For almost a year, the state-owned media had tried to appear neutral on the Syrian issue. News of the uprising was either under-played or presented in a more or less balanced way, reflecting the views both of the Baathist regime and its opponents.

In recent weeks, however, the Khomeinist media have adopted a position openly hostile to the Syrian opposition. Instead, they offer a narrative that echoes the Syrian regime’s claim that the uprising is a “foreign plot” and that the violence that has claimed over 5,000 lives is the work of “terrorist groups.”

However, the Tehran media have not deemed it fit to cover the Syrian events directly. Not a single Iranian media outlet has despatched a reporter to Syria. Two of Iran’s state-owned news agencies have permanent offices in Damascus. But they, too, make no attempt at covering the nationwide revolt. The reason is that even the most mercenary journalist would not be able to put his name to the Baathist regime’s brazen lies.

Another sign that Iran may have decided to heighten its profile in Damascus is the increase in arms shipments to Syria. An Iranian air cargo company, Aseman [Airlines], reports a 50 per cent increase in flights to Damascus. Although part of the “air-bridge” may be used for non-military cargo, the dramatic increase could also be related to faster gunrunning to save the Syrian regime.

There is also an increase in overland transport to Syria. While the flow of pilgrims from Iran has dwindled to a trickle, the number of trucks carrying cargo, including arms, has risen sharply. Last week, Turkey impounded four Iranian trucks on suspicion of smuggling weapons to Syria. Despite denials from Tehran, Turkey insists that this is the second time in six months that it has stopped Iranian trucks ferrying weapons to Syria.

Yet another sign of Iran’s greater involvement in Syria is the recent visit to Damascus of General Qassem Suleimani who commands the Qods Force (Sepah Quds), an ad hoc military unit with the official mission of “exporting revolution”.

According to Tehran sources, Suleimani held a four-hour meeting with President Bashar al-Assad in Damascus to discuss “coordination of strategy to protect Syria against foreign conspiracies.”

On a number of occasions, Ahmadinejad and Salehi have expressed reservations about backing the Syrian regime. It now seems that Khamenei has brushed aside those reservations. Sources in Tehran tell me that the “Supreme Guide” has decided to prevent the fall of Syria into “the camp hostile to the Islamic Republic.”

Could Iran save the Syrian regime?

Of course, Iran could ease the effect of sanctions on Syria by supplying it with money and arms. It could also play a role by bolstering the Syrian regime’s policy of trying to crush the revolt by killing and kidnapping.

General Suleimani already has a presence in Syria with a military mission of over 600 men. He could bring in units from the Lebanese branch of Hezbollah to help Syrian forces loyal to the regime. The Qods Force has trained hundreds of Hezbollah fighters for operations outside Lebanon. Suleimani has tested some of those fighters in operations in Iraq.

Suleimani could also count on elements from the Iraqi Jaish al-Mahdi (The Amy of the Hidden Imam). Although it is supposed to have disbanded, Jaish al-Mahdi has retained its arms and maintains informal existence under Suleimani’s men.

Stronger support from Iran could also raise the moral of Syrian ruling elites, some of whom have began to waver in recent weeks. Some potential deserters from the Syrian security forces may decide to await the outcome of Iranian intervention before making their move.

Iranian intervention could also persuade Russia and China to continue dragging their feet over possible United Nations’ intervention to stop the massacre in Syria.

More importantly, as some circles in Tehran suggest, the Islamic Republic could promote a formula under which President Assad is asked to step down so that the Baathist regime could survive in a new configuration.

Despite all that, Tehran’s chances of success in Damascus are slim.

To start with, the Syrian armed forces have never really warmed to the Tehran-Damascus axis. Although the two countries have signed a defence pact, exchanges between Iranian and Syrian military have remained limited. Iran has more such exchanges with North Korea and Venezuela than with Syria.

Syrian elites are equally cool towards alliance with the Iranian imamate.

The Baathist Party claims to stand for a secular, non-sectarian system of government with a Socialist programme. The Iranian imamate, on the other hand, is based on religious mumbo-jumbo, sectarian superstitions, and anti-left hatred. A Syria controlled by “Walayat al-Faqih” [Guardianship of the Jurists] might not be attractive to many members of the elite in Damascus.

Even if Tehran succeeds in making Suleimani de facto Satrap of Syria, the Syrian revolt may prove more resilient than Khamenei imagines. Ahmadinejad and Salehi have understood this. This is why, in cryptic style, they have tried to put some blue water between the Baathist regime and Iran.

Iran has no national interest in helping crush the Syrian uprising. Its military intervention could open the way for other nations to also send troops to Syria.

Prudence dictates that Iranian policymakers take into account the possibility that the Syrian revolt may succeed in bringing about regime change in Damascus.

By trying to prevent Syria from moving to the “hostile camp”, Khamenei and Suleimani may well render that inevitable.