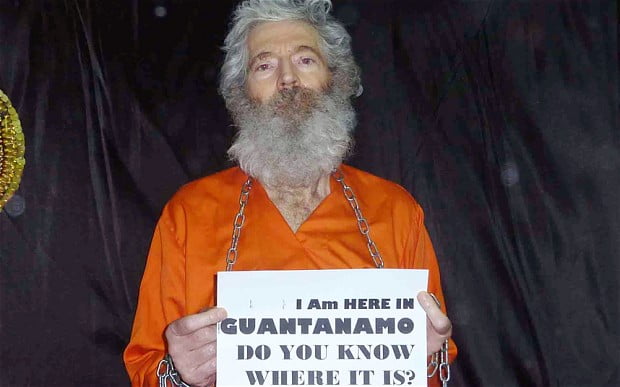 The family of retired FBI agent Robert Levinson, who went missing in Iran in 2007, have released pictures of him dressed in an orange jumpsuit like a Guantánamo Bay prisoner, as they continue to hold hope that he is still alive.

The five photographs were taken in April 2011, just months after the family also received

a video that was emailed anonymously.

Mr Levinson, a private investigator, disappeared in 2007 on the Iranian island of Kish. The Iranian government has repeatedly denied knowing anything about his disappearance.

However, the consensus among US officials involved in the case is that despite years of denials, Iran’s intelligence service was almost certainly behind the 54-second video and five photographs.

An expert on Russian organised crime, Mr Levinson, who would now be 64, retired from the FBI in 1998 and became a private investigator. He was investigating cigarette smuggling in early 2007, and his family has said that took him to the Iranian island of Kish, where he was last seen.

Kish is a popular resort area and a hotbed of smuggling and organised crime. It is also a free-trade zone, meaning US citizens do not need visas to travel there.

Mr Levinson’s wife, Christine, decided to release the images because she felt her husband’s disappearance was not getting the attention it deserves from the US government.

“There isn’t any pressure on Iran to resolve this,” she said. “It’s been much too long.” She said that because her husband disappeared in Iran, she believes he is still being held there.

“It needs to come front and centre again,” she told The Associated Press. “There needs to be a lot more public outcry.”

She said she has met with Barack Obama and John Brennan, the president’s nominee to head the CIA. She said that both men had pledged to do everything they could to free her husband. Now, nearly six years after his disappearance, she thinks Iran is being let off the hook.

FBI spokeswoman Jacqueline Maguire said: “As we near the sixth anniversary of his disappearance, the FBI remains committed to bringing Bob home safely to his family.”

Iranian regime only allows for internet users to use dial-up