Former Member of Parliament Hossein Loghmanian and four reformist activists from Hamadan Province were arrested while on their way to Tehran to meet former president Mohammad Khatami on March 16, 2013. These arrests may mark the first detentions of political figures in relation to the upcoming June 2013 presidential elections in Iran. 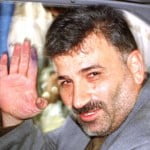 On March 17, Hossein Loghmanian’s four companions were indicted by Branch 7 of Hamadan Courts under Judge Tarkashvand and were released on bail, but Loghmanian refused the charges. In protest of his illegal detention, he prevented his family from posting his bail, and was transferred to Hamadan’s Alvand Prison the same day.

The former MP told the court he had not committed a crime that would necessitate posting a bail. He added that on principle, meeting with Khatami is not a crime, and that since he was stopped on the road, he had not even had the chance to meet with Khatami. Forty days after his illegal arrest, Hossein Loghmanian remains in prison and is not allowed to have visitors. His family is concerned about his health due to a history of high blood pressure and diabetes.