BREAKING NEWS
GMT+2 05:37
Home Human Rights 43 executions in the past month in Iran

43 executions in the past month in Iran 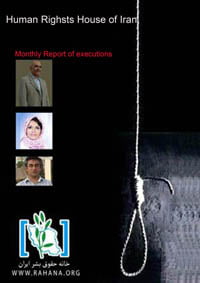 According to “RAHANA”, Human Rights House of Iran, in the month of February 30 individuals were executed for drug related charges. Six others, executed for “Rape”, two executed for “murder” and one person was executed under charges of “Enemy of god (Moharebeh)”

Also, four political prisoners by the names of Jafar Kazemi, Mohammad Haj Ali Aghaei, Zahra Bahrami, and Farhad Taram are among the executed. Kazemi, Aghei, and Bahrami were arrested during the post election riots that were executed under charges of “Creating terror and horror”. Amongst them Zahra Bahrami is an Iranian-Dutch citizen whom although was arrested during the unrest and was interrogated, was unexpectedly executed under drug related charges and neither her lawyer nor family were informed of this matter.

Tehran province and its surrounding cities have witnessed most executions in the current month as 15 individuals have been executed in our capital. Khuzestan province (northern, southern and Razavi), with 12 executions is second in ranking. Although in the recent months we have seen many reports of executions at Vakilabad prison in Mashad, but in the recent month following an increase in this number prison officials finally confirmed the reports. In the recent month at least 10 executions took place at this prison, 5 of which were of Afghan citizens living in Iran.

Tehran, Khuzestan and Isfahan have in order had 66, 48, and 37 executions since the beginning of the Iranian year to the end of February that have caused them to have the highest execution rates.

In the month of February one female was amongst the executed by the name of Zahra Kazemi and three executions took place in public. Therefore in the past 11 months of the year according to reports declared by “official sources and judicial system” Iran has had a total of 313 executions.

Below tables including the exact information’s on place, date and charges of every individuals can be downloaded as a PDF below.