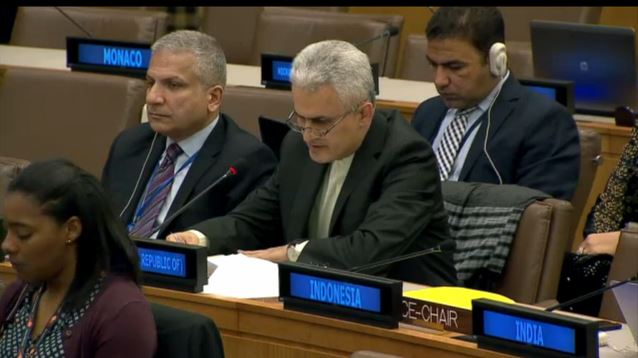 November 16, 2016—The International Campaign for Human Rights in Iran welcomes the United Nations’ adoption of a resolution expressing serious concern over numerous human rights violations in Iran, including the systematic use of arbitrary detention and discrimination against women and minorities, as well as the “alarmingly high” frequency and application of the death penalty in Iran.

Resolution A/C.3/71/L.25, which was passed by the UN General Assembly’s Third Committee on November 15, 2016 with 85 nations voting in favor, 35 against and 63 abstentions, also called on Iran to cooperate with the UN by allowing its special rapporteur to visit the country.

“The international community has spoken: Passage of this resolution by 85 UN member states indicates there is broad agreement that the government of Iran must improve its human rights record in areas such as executions, the suppression of peaceful dissent, and discrimination against women and minorities,” said Hadi Ghaemi, the Campaign’s executive director.

“If there was any attempt by Iran to address its human rights violations, we would not see the Third Committee pass these resolutions year after year,” added Ghaemi. “Iran needs to engage directly with the UN mechanisms and address these abuses.”

The resolution called on Iran to “end the continued and sustained house arrest of leading opposition figures from the 2009 presidential election despite serious concerns about their health.” Mir Hossein Mousavi, his wife Zahra Rahnavard, and Mehdi Karroubi have been under house arrest in Tehran for almost six years for supporting the Green Movement, which grew out of peaceful protests against the widely disputed result of that election.

Specifically, the UN resolution expressed “serious concern” over Iran’s application of the death penalty, which it uses for crimes that do not qualify as the “most serious” crimes, for juvenile offenders, and with “disregard for internationally recognized safeguards.”

It urged the Islamic Republic to end the “widespread and systematic use of arbitrary detention” and to uphold “fair trial standards.”

The resolution “strongly urged” Iran to eliminate “all forms of discrimination” against women and girls, specifically citing freedom of movement, equal protection and access to justice, the practice of child and forced marriage, and the need for “equal participation in the labour market and all aspects of economic, cultural, social and political life.”

It also called upon Iran to end the “denial of access to adequate medical treatment” in the country’s prisons.

The resolution urged President Hassan Rouhani to turn his human rights pledges “into concrete action that results in demonstrable improvements as soon as possible” and ensure that Iran honors its obligations under international human rights laws.

The UN resolution also called on Iran to “deepen its engagement with international human rights mechanisms” by:

“(b) Increasing cooperation with other special mechanisms, including by facilitating long-standing requests for access to the country from thematic special procedures mandate-holders whose access to its territory has been restricted or denied, despite the standing invitation issued by the Islamic Republic of Iran, without imposing undue conditions upon those visits;

“(c) Implementing all accepted universal periodic review recommendations from its first cycle, in 2010, and its second cycle, in 2014, with the full and genuine participation of independent civil society and other stakeholders in the implementation process;

“(d) Building upon the engagement of the Islamic Republic of Iran with the universal periodic review process by continuing to explore cooperation on human rights and justice reform with the United Nations, including the Office of the United Nations High Commissioner for Human Rights;

“(e) Following through on its commitment to establish an independent national human rights institution, made in the context of both its first and second universal periodic reviews by the Human Rights Council, with due regard for the recommendation of the Committee on Economic, Social and Cultural Rights.”