BREAKING NEWS
GMT+2 06:18
Home Human Rights A Azerbaijani musician has been sentenced to 6 months in prison

A Azerbaijani musician has been sentenced to 6 months in prison 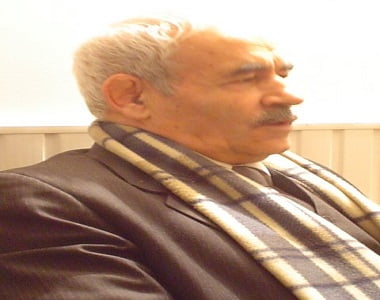 Iran Briefing- Maestro Hassan Damirchi (Mohammad Hassan Har Goli) has been sentenced to 6 months in prison by the revolutionary court of Tabriz.

According to a report by Human Rights Activists News Agency (HRANA), the third branch of the revolutionary court of Tabriz has sentenced maestro Hassan Damirchi (Mohammad Hassan Har Goli) to 6 months in prison.

Naghi Mahmoudi, the human rights activists said to HRANA: “Judge Hamid Bagherpour has issued this verdict on the basis of proofs like participating in ethnic gatherings in and outside Iran, gathering donations without legal permission, teaching music without permission, communication with separatists in and outside Iran and visiting ethnic prisoners with the aim of appreciating them for their separatist thoughts.”

“None of the evidences the judge mentions in the verdict is a reason for the charge of propaganda against the regime which is stated in article 500 of Islamic punishment laws.” He said.

Hassan Damirchi had been arrested on the same charges several times before.

He had been sentenced to 1 year in prison during the demonstrations in Tabriz in 2006 which were against the insulting cartoon of “Iran” newspaper.

Mr. Timmerman, Bring Your Site Down!