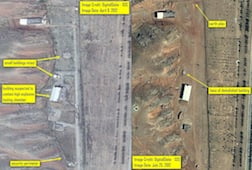 New commercial satellite photos continue to show that Iran is trying to cover up work started at a facility it has been using for high explosives tests related to what the United States believes is that country’s nuclear weapons program, according to a former international weapons inspector who has been closely flowing Iran’s nuclear ambitions.

“The degree of the site’s modification and the fact that this apparent cleanup work started soon after the IAEA’s (International Atomic Energy Agency) request for access cast further doubt on Iran’s claims that its nuclear program does not or has never had any military aspects,” says a report issued by the Institute for Science and International Security and written by the inspector, David Albright, and co-author Robert Avagyan.

In May, satellite photos showed items being moved at that the site, which the institute said had remained unchanged since 2004. The latest photos show a pair of buildings have been knocked down and much of the sight has been cleaned up. The institute said Iran claims the activity is routine construction work.

The site at the Parchin military complex southwest of Terhan is the focus of a dispute between the Iranian government and the IAEA. According to a report by the institute, the IAEA announced last February, it wanted to inspect that site to make sure there had been no testing of high-explosives for nuclear-related purposes.

Iran would not agree to the inspection unless there was an agreement on its entire nuclear program.