Afghan Senate members have certified the existence of documents affirming that Taliban collected endorsements from both Iran and Russia. Indeed, Taliban members are located in the cities of Mashhad, Yazd and Kerman in Iran. They often travel to and fro between the two countries, according to locals at the border of Afghanistan. 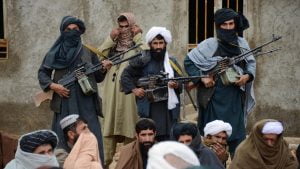 A number of deputies of the Council of elders of Afghanistan, advocated that: “Moscow supplied the Taliban with ammunition in order to restrain the widening influence of ISIS and its affiliated groups in Afghanistan and preclude threats against the Central Asian countries.”

The Governor of the state of Farah in Afghanistan, Asif Ning, explained in an interview yesterday with the Dari-speaking ‘Freedom Radio’, the circumstances surrounding the latency of Taliban on Iranian territory, stating: “They are living in the cities of Yazd, Kerman and Mashhad. They eventually return to Afghanistan to vandalize. At the time being, a number of senior members of the Taliban leaders are living in Iran.”

“The bodies of Taliban fighters killed in recent clashes were delivered to their families in Iran,” he added.

It is against this background that the spokesperson of the Iranian Foreign Ministry Bahram Kasimi refuted the above allegations declaring that “the reports affirming the presence of Taliban members in Iran are clearly unfounded as fraternal relations exist between Iran and Kabul on the basis of common interests.”

The report states, quoting the head of the Afghan Senate, Fadel Hadi Muslim Yar, that “there are in our possession supporting evidence confirming the cooperation between both Russia and Iran with the Taliban.”

In addition, as revealed by the American-run radio ‘Freedom’, which broadcasts in Afghanistan in Persian, Dari and Pashtun the Taliban are often seen crossing the border into Iran according to local border residents. Several Afghan lawmakers also affirm Tehran’s involvement in supplying sophisticated weapons to the Taliban.

Moreover, the report quoted the commander of NATO forces in Afghanistan General Jean Nicholson. The latter stressed the “the involvement of other countries in terrorism on the Afghan territory”. He further asserted that: “These countries are not only supporting terrorism, but providing favorable conditions for terrorists to exploit the Afghan territory. Hence, facilitating their terrorist activities”

As confidentially disclosed by an Afghan immigrant living in the Iranian city of Taybad, members of the Taliban are attempting to limit their appearance in public places and to living in confinement from the rest of the Afghans (in Iran). Furthermore, according to radio ‘Freedom’ experts, all of Iran, Tajikistan and Russia are cooperating in supporting the Taliban militia. It was Vladimir Putin’s special envoy to Afghanistan Damir Kepplov who voiced, in a statement to the news agency Anatolia, his deep concerns about the growth of terrorism in Afghanistan. However, Afghan lawmakers oppose any intervention by Russia and Iran in Kabul’s affairs.

On 3rd of January a news spread in social media regarding Qasem Soleimani and AbuMahdi Mohandes who has died by a US drone strike near Baghdad Airport and this was the end of their lives. In social media, especially Iranian users, there was a chaotic situation, some called of “the general of... END_OF_DOCUMENT_TOKEN_TO_BE_REPLACED