After Geneva progress, Iranian team must battle hard-liners at home 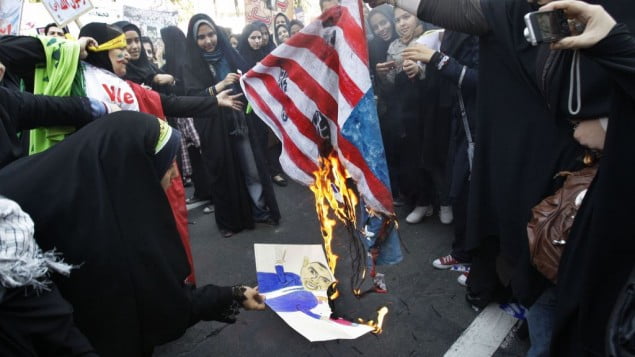 TEHRAN, Iran (AP) — The Iranian foreign minister’s parting words in Geneva carried hopes that the US and other world powers could begin closing the gap with Tehran over its nuclear program. He returns home with perhaps an even tougher challenge at finding common ground. 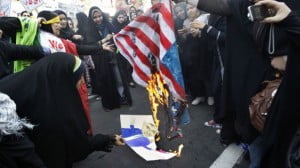 In a sharp counterpoint to the Western outreach by President Hassan Rouhani’s government, hard-line factions in Iran have amplified their bluster and backlash in messages that they cannot be ignored in any diplomatic moves with Washington either in the nuclear talks or beyond.

They also hold important sway over the pace and direction of Iran’s nuclear program through the Revolutionary Guard, the single most powerful institution in Iran. Without its clear backing, the West and its allies could grow increasingly skeptical over Rouhani’s ability to deliver on efforts to ease fears that Iran could be moving toward an atomic weapon or a so-called threshold state — without an actual bomb, but with all the expertise and material in place.

“Iran’s hard-liners are the not-so-silent partners in everything that Rouhani has set in motion,” said Scott Lucas, an Iranian affairs expert at Britain’s Birmingham University. “The Revolutionary Guard is never a bystander in Iran.”

Even the smallest gestures toward the US by Iran poke at a nest of complications: Deep historical grievances, perceptions of national pride and a culture of “enemy” resistance that runs to the core of groups such as the Revolutionary Guard, which is instinctively wary about anything that could chip away at its vast influence that stretches from the military to the economy.

For Rouhani and his allies, it also means a possibly short leash.

Iran’s top decision-maker, Supreme Leader Ayatollah Ali Khamenei, has allowed Rouhani to reach out to the US. The immediate goal is trying to address concerns over Iran’s nuclear program and getting painful economic sanctions rolled back in return. Two days of talks in Geneva this week between Iran and envoys from six nations — the permanent UN Security Council members plus Germany — ended with rare optimism that at least some new paths have been opened to explore.

But all noted that the negotiating process could drift well into next year, and it remains unclear whether Iran could offer verifiable concessions needed to end the deadlock. In Washington, State Department spokeswoman Jen Psaki said Iran had offered “a proposed approach” on moving the talks forward.

The West fears Iran’s uranium enrichment labs eventually could churn out weapons-grade material, and some in Israel and elsewhere worry the outreach and goodwill by Rouhani is merely a ploy to buy time. Iran insists it does not seek nuclear weapons.

It’s likely that Khamenei will keep his backing for Rouhani’s initiatives as long as it seems Iran is moving toward it objectives of easing sanctions, which have strangled the economy by cutting into vital oil exports and blocking the country from international banking networks. 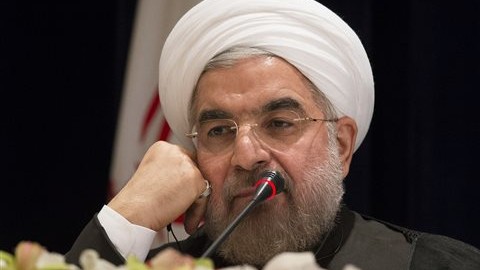 But any stumbles — such as the West demanding sweeping United Nations inspections — certainly would bring a barrage of outrage from Iranian hard-liners. That, in turn, could pressure Khamenei to reconsider his support for Rouhani’s bid at historic detente with Washington.

“The Rouhani government understands that,” said Ehsan Ahrari, a Virginia-based strategic affairs analyst. “It is operating under a very short window of opportunity.”

This is part of the motivation behind Foreign Minister Mohammad Javad Zarif’s insistence for talks to quickly reconvene. The next two-day round is scheduled to begin Nov. 7 in Geneva.

A death to America committee

At the same time, Iran’s Revolutionary Guard and others are making it clear that Rouhani’s government will get no free pass in expanding dialogue with Washington after a nearly 34-year diplomatic freeze.

Hard-line factions, including Guard commanders, have pledged to stage a major anti-US rally November 4, the anniversary of the takeover of the US Embassy in 1979 in the wake of the Islamic Revolution. The date is marked each year by gatherings outside the former embassy’s brick walls, which are covered with anti-American murals. But the fervor has waned in recent years, with authorities bringing school children by bus to help fill out the crowds.

Gen. Masoud Jazayeri, a senior Guard commander, said a “death to the US committee” will be set up to organize next month’s rally, promising chants of “death to America” louder than any previous years.

It’s a direct response to appeals this month by Rouhani’s political mentor, former president Akbar Hashemi Rafsanjani, to drop the familiar slogan from events such as Friday prayers at Tehran University. In a speech Tuesday in the western city of Kermanshah, Rafsanjani repeatedly was interrupted by opponents bellowing anti-American chants.

Rafsanjani countered that Rouhani’s critics are holding the nation back.

“If extremists allow us to have relations with the world, many of the problems of the country will be resolved,” he told a group of industrialists and businessmen. “Otherwise, we will get nowhere.”

These kind of ideological collisions are not new in Iran. They flared nonstop during the 1997-2005 presidency of reformist Mohammad Khatami. In 2009, they triggered the worst domestic unrest since the Islamic Revolution following the disputed reelection of president Mahmoud Ahmadinejad.

But even deeper questions have been dredged up by the overtures to Washington opened by Rouhani at the UN in New York, which included a groundbreaking phone call from President Barack Obama.

It challenges a power structure that gives the Revolutionary Guard and other hard-liners vast controls over policymaking, and forces many Iranians to reevaluate generations of anti-American views that go back to a US-backed coup that reinstalled the pro-Western shah dynasty in 1953.

“It scares Iran’s hard-liners like almost nothing else can,” Mustafa Alani, a political analyst at the Gulf Research Center in Geneva. “Taking away the fear of the ‘enemy’ — even if just a little bit for now — strikes directly at the cornerstones of groups like the Revolutionary Guard.”

Rouhani’s government has proposed conducting an opinion poll on US relations in a maneuver to possible muffle hard-liners. The idea, however, has been blasted by former Foreign Minister Ali Akbar Velayati, a senior adviser to Khamenei.

“To offer their opinion, the people need to have access to secret information,” he said. “And it will be contrary to national interests to expose the secrets because the enemy will learn about it.”