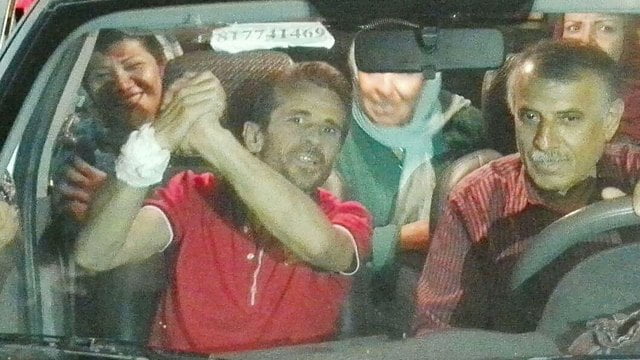 Imprisoned labor activist Jafar Azimzadeh was temporarily released on “extendable furlough” on June 30, 2016 and promised a retrial three days after judicial authorities publicly refused to look into his case following a debilitating hunger strike that left him hospitalized.

“We will not do anything for Jafar Azimzadeh and whatever the hell happens to him, we will accept the consequences,” the Tehran Prosecutor’s Office told Azimzadeh’s relatives on June 27, 2016 after they delivered a letter from the Official Medical Examiner’s office recommending urgent treatment for Azimzadeh.

Azimzadeh’s wife, Akram Rahimpour, told the International Campaign for Human Rights in Iran on June 27, 2016 that her husband had been on hunger strike for the past two months. “My husband is not willing to end his hunger strike. He has been hospitalized [since June 17, 2016] and the IV is the only thing keeping him alive,” she said. “He’s physically weak and the pain and bleeding in his stomach have worsened. There have also been dangerous fluctuations in his heart beat.”

Azimzadeh’s former cellmate Esmail Abdi, the secretary general of the Teachers’ Association of Iran—who was conditionally released from prison on May 14, 2016 on bail until his sentence is finalized—told the Campaign that the Official Medical Examiner had recommended medical furlough (temporary leave) for Azimzadeh so he could receive proper medical care for his urgent health problems.

“We hope that the prosecutor will pay attention to the medical examiner’s letter and avoid a human tragedy and do the rational thing by releasing him as soon as possible and reviewing his case,” said Abdi on June 27, 2016.

Political prisoners in Iran are singled out for particularly harsh treatment, which often includes denial of medical care.

Rahimpour said that Azimzadeh has been on hunger strike since April 29, 2016 to protest the six-year prison sentence he was handed for his peaceful protest activities in support of workers’ rights.

“Remove the charge of ‘assembly and collusion against national security’ and other security charges from my case and those of other labor activists and teachers,” wrote Azimzadeh from his cell in Evin Prison’s Ward 8 in an open letter to Deputy Labor Minister Hassan Hefdahtan on June 17.

“In the three-year lifespan of the Rouhani administration, the majority of the most effective independent labor activists and teachers have been prosecuted under national security laws and given long prison sentences,” he said. “Most of these individuals were arrested by the Intelligence Ministry under the current government and all of them were charged with ‘assembly and collusion against national security’ and faced maximum penalties in the Revolutionary Court.”

Another Bahai mother went to prison with her baby

Tehran’s new plan to dominate the region – and beyond