Unidentified aircraft bomb warehouses at airport near Iraqi border, an area that has seen many alleged Israeli attacks in recent months, according to opposition media 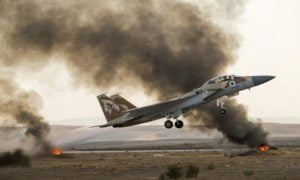 According to the Step News agency, the planes fired several missiles at warehouses belonging to Iran’s Islamic Revolutionary Guard Corps at the al-Hamdan airport, outside Deir Ezzor, in the Abulkamal region of Syria, an area that has reportedly been targeted several times by Israeli airstrikes on Iranian facilities in the past year.

Troops on the ground fired anti-aircraft weapons at the attacking planes, the news site reported.

There were no immediate reports of casualties.

The Israeli military as a rule does not comment on its airstrikes in Syria, save for those that are in retaliation to attacks on Israel.

Syria’s Abulkamal region, near the border with Iraq, is seen as a crucial region for Iran and its plans to establish a land corridor to the Mediterranean Sea in order to more easily transport materiel and fighters throughout the Middle East.

The reported attack on the IRGC weapons caches on Wednesday came some two weeks after a flareup between Jerusalem and Tehran, during which Iranian troops fired several rockets at northern Israel from Syria and the Israel Defense Forces retaliated with a series of airstrikes on Iranian and Syrian military targets.

According to the IDF, four rockets were fired at the Golan Heights and northern Galilee regions from Syria in the predawn hours of November 21. The Iron Dome missile defense system intercepted all four incoming projectiles, the military said.

In reprisal raids the following morning, the Israeli Air Force bombed several Iranian facilities in Syria, including a building at the Damascus International Airport used by the IRGC that had Iranian operatives in it at the time, as well as a number of Syrian air defense batteries.

“We struck a building staffed by Iranians at the Damascus airport. We assess that there are Iranians killed and injured,” an Israeli defense official said at the time, on condition of anonymity.