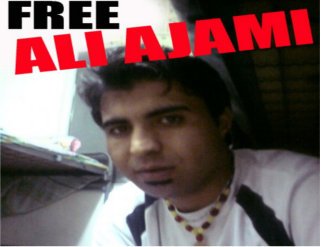 HRANA News Agency – Ali Ajami is an imprisoned student activist who is spending the last days of his two year sentence in Rajai-Shahr Prison. During his incarceration, Ali Ajami has been denied basic rights including access to telephone and furlough granted to political prisoners. Incapable of traveling the long distance between their residence and Rajai-Shahr Prison in Karaj every week, Ali Ajami’s elderly parents see their child every four months.Ali Ajami’s family lives in Sabzevar County in the north eastern province of Razavi Khorasan.

In an interview with Jaras News, Javad Ajami explained his brother’s condition in prison and said, “I saw my brother 20 days ago. Since then, I don’t have any news from him. We live in Sabzevar County and must travel the long distance from home to the city of Karaj for 20 minutes of visit with him. For this reason, we can’t make the trip every week. My parents are old and can’t bear the physical hardship. They came to see Ali three months ago. The officials must understand how difficult it is for my parents and how much they suffer from not being able to see Ali.”

Ali Ajami is a law student at Tehran University, a leftist activist and the editor of a student publication called “A Better World.” Ali Ajami was amongst the students who sustained some injuries when Basij Militia attacked the dormitories in Tehran University on June 14, 2009.

Ali Ajami was arrested on February 10, 2010 at home in Sabzevar County and taken to a detention center in the city of Sabzevar. He was then transferred to a solitary confinement in Ward 209 in Evin Prison where he spent 100 days in a legal state of limbo. On January 26, 2011, Ali Ajami was taken to Rajai-Shahr Prison where he has been forced to tolerate very difficult conditions during the last few months of his sentence. Ali Ajami has less than 3 months left of his prison term.

Judge Abolqasem Salvati presiding over the Revolutionary Court, Branch 15, sentenced Ali Ajami to 4 years in prison on charges of “Propaganda and Conspiracy Against the Regime,” but this verdict was later reduced to 2 years by the Appeals Court of Tehran Province.

Expressing concerns about his brother’s condition, Javad Ajami said, “Ali was studying law, and he had only 3 months left to graduate when they arrested him in Sabzevar. He was transferred to Mashhad Prison first and then taken to Evin when he was convicted. He was sentenced to 4 years in prison, but the Appeals Court overturned this verdict and reduced his sentence to 2 years in prison on charges of Propaganda Against the Regime. He has been in prison one year and 8 months. He has served 8 months in Rajai-Shahr Prison. I swore to God; our predicament is so painful and unbearable that I really don’t know what to say or which pain to describe.”

Yesterday, the families of political prisoners reported that new restrictions had been imposed on the inmates. The families say that prisoners are beaten and battered regularly these days in Rajai-Shahr Prison, and political prisoners are harassed by prison officials and guards for any excuses. Lately, it was reported that Masoud Bastani, an imprisoned journalist, was beaten by the prison guards in Rajai-Shahr Prison in front of his mother and wife. Last week, while Ali Ajami and Jafar Eghdami were being taken to the prison hospital, they were beaten by prison guards, and when the prisoners objected to the beating, both of them were sent to solitary confinement.

Pointing out the horrific conditions in Rajai-Shahr Prison, Javad Ajami added, “The situation in Rajai-Shahr Prison is extremely poor. Since Ali was transferred there, he has been very upset and is under pressure because political prisoners are mixed with ordinary inmates convicted of a variety of crimes. Since then, his physical health has suffered; medical problems aren’t handled in prison, and there is no recourse available. When he was in Evin, conditions were a bit better there. In our last visit, I noticed Ali was ill, had a swelling and wasn’t emotionally well either. Ali didn’t have any physical problems before his imprisonment and was totally healthy.”

Emphasizing that his brother has been denied any rights granted to political prisoners, Java Ajami continued, “During his incarceration, Ali hasn’t been given furlough. No matter how hard he and we have tried, there has been no answer. We wrote letters to the prosecutor’s office but received no reply. We really don’t know what to do and appeal to which government office to ask for our loved one’s basic rights.Ali has been denied the right to have access to a phone, to have in-person visits with his family or go on furlough. During all this time, we have been given the permission to see him in-person only once.”

Addressing government officials, Java Ajami at the end said, “If anyone hears the voices of Ali’s elderly parents and understands their pain, give him a furlough or at least grant us the permission to see him in person once more so that my parents suffer less and experience the joy of embracing Ali in their arms.”

In a letter written to the Head of the Judiciary Branch, a group of political prisoners in Rajai-Shahr Prison have revealed accounts of being insulted, belittled and physically punished by prison officials and have requested a special committee to be appointed to interview the prisoners and investigate all the allegations.

In this letter, political prisoners of Rajai-Shahr Prison wrote, “Only in the last six months, eight political prisoners in Hall 12 have been insulted, belittled and beaten in various ways. Unfortunately, every time one of these prisoners decided to seek justice by protesting against these acts, he was set up by the guards and accused of some sort of crime. Consequently, the prisoners were forced to withdraw their objections fearing new charges that would have increased their prison terms.”