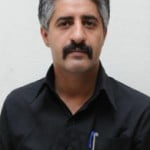 Ali Reza Roushan, poet, writer and head of the book section of Shargh Newspaper, was arrested at his home and transferred to an undisclosed location. Ali Reza Roushan is a poet who has published a collection of poems called “There is no book” and his poetry has been translated into French.

Reporters at Majzooban Noor website reported that a number of their colleagues and supervisors have been arrested. The names of the arrested are Hamid Moradi Sarvestani, Reza Entesari, Alireza Roshan, Ali Karami, Mehdi Osanloo, Mehdi Hosseini, Ali Astaraki, Mostafa Abdi, and Mehran Rahbari. Despite being arrested by plainclothes officials, judiciary authorities have not shared any information regarding the whereabouts of the arrested.

This website has reported that in addition to the 9 colleagues mentioned above who were arrested in Tehran, another 2 have also been detained. They are 2 dervishes by the names of Nusrat Tabasi and Ali Moazami.

Nosrat Tabasi is a dervish who was arrested on September 4th at his home and transferred to an undisclosed location by security agents.

Prior to this there was a violent incident on Friday September 2nd in Kavar County at Fars Province where Basij forces used tear gas and opened fire on scores of dervishes from the Nematollahi Gonabadi order, resulting in many injuries.

During these clashes a large number of dervishes in the city of Kavar were arrested. Also on September 3rd several plainclothes officials raided the homes of 2 dervishes named Shahbaz Zareh and Amanollah Cheraghi without arrest warrants. When they discovered these two individuals were not home, the agents arrested their fathers, Manouchehr Zareh and Hossein Ali Cheraghi.

Also on the early morning hours of September 4th, 13 plainclothes officials accompanied by 2 soldiers attacked the home of Abdolreza Arayesh, a member of the Nematollahi Gonabadi dervish order. The plainclothes officials detained him and transferred him to an undisclosed location after confiscating personal documents and cultural items from his home.

Also arrested were a number of Gonbadi Dervishes who were visiting relatives or had accompanied the injured from the incident at Kava, to the Rajai Shiraz Hospital. The names of those arrested are Hamid Pourreza Gholi, Khosrow Dari, Majid Moteghian, Hossein Assadi Fereidooni, Hassan Veisghali, Hamid Parhizgar and Hekmat Naderi.

All the detained Gonbadi dervishes from the Kavar county incident were transferred to the headquarters of the Shiraz security police.

On 3rd of January a news spread in social media regarding Qasem Soleimani and AbuMahdi Mohandes who has died by a US drone strike near Baghdad Airport and this was the end of their lives. In social media, especially Iranian users, there was a chaotic situation, some called of “the general of... END_OF_DOCUMENT_TOKEN_TO_BE_REPLACED