Analysis: How Iran is transforming Iraq into a second Lebanon

Jul 11, 2019 IRGC, Politic, Quds Force, Slider Comments Off on Analysis: How Iran is transforming Iraq into a second Lebanon 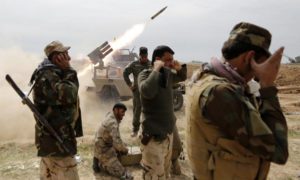 Analysis: How Iran is transforming Iraq into a second Lebanon

The government of Iraq appears to be playing a double game with the United States and Iran over the influence of the Iranian-backed Hashd al-Shaabi umbrella organization of predominantly Shiite militias in the country.

Mahdi issued an ultimatum which said the offices of Hasd al-Shaabi affiliated militias had to be closed down before July 31 while the militias also must end their practice of erasing checkpoints in areas where they want to increase their influence.

Militias failing to comply with the order will be considered illegal organizations while Mahdi gave them the option to transform into political parties after abandoning their weapons.

At first sight the move appeared to be the result of American pressure to curb the Iranian influence in Iraq. However, if we take a close look at what is actually going on in Iraqi Iranian relations we will see that the decree benefits Iran and that Iraq is playing a double game.

The US Administration of President Donald J. Trump started to pressure Iraq over curbing the activities of Hashd al-Shaabi after a series of attacks on US-related targets in Iraq by militias affiliated with the umbrella organization.

The State Department, furthermore, concluded that it was the Iranian proxy in Iraq and not the Ansar Allah (Houthi) militia in Yemen which was behind a recent drone attack on Saudi Arabia.

Last week, The Wall Street Journal reported the State Department “said it had evidence that drones used in the attack originated from southern Iraq, an area filled with pro-Iran Shia jihadist groups (Hashd al-Shaabi) that fight under the command of the Islamic (Iranian) Revolutionary Guard Corps (IRGC).”

On 3rd of January a news spread in social media regarding Qasem Soleimani and AbuMahdi Mohandes who has died by a US drone strike near Baghdad Airport and this was the end of their lives. In social media, especially Iranian users, there was a chaotic situation, some called of “the general of... END_OF_DOCUMENT_TOKEN_TO_BE_REPLACED