Since the nuclear agreement between Iran and 5+1 countries was signed in July 2015 and the economic sanctions were eased, Iran has become even more aggressive in pursuing its radical and hegemonic policies in the region. Its military advances in Syria, the ascendance of the pro-Hezbollah candidate to Presidency in Lebanon and the military dominance of its proxy militias in Iraq that form the Popular Mobilization Forces (PMF) have further emboldened Iran. 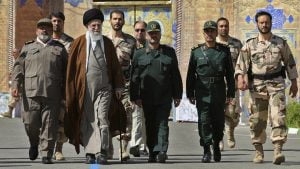 As a result, it has increased its support to Yemeni rebels and radical Shiite groups in Bahrain. Simultaneously, the neighboring Afghanistan has emerged as Iran’s next target to expand its influence and shape its future.

In order to implement its long-term strategy in Afghanistan, Iran has increased its military support to Taliban and at the same time, counts on its own militia proxy, the Fatemiyoun Division which is made up of Afghan Shiites which was founded by Revolutionary Guards in 2013 to fight in Syria. This battle-experienced force is estimated to have more than 15,000 members and could potentially be used as an important tool to secure Iranian influence in Afghanistan.

Iranian support to Taliban became more apparent in May 2016 when the group’s top leader, Mullah Akhtar Mohammad Mansour was killed by US drone attack in Pakistan as he was returning from Iran. Jahan News, an Iranian outlet close to the Revolutionary Guards, confirmed that he had stayed in Iran for two months prior to his death and had meetings with Iranian officials. In May 2015, an Iranian news websites tied to the Revolutionary Guards reported that a Taliban delegation visited Iran and several editorials have been published in governmental press to justify Iran’s support to Taliban.

On December 12, 2016, Iran’s ambassador to Kabul, Mohammad Reza Behrami, told Tasnim News that “Iran maintains contacts with the Taliban for control and intelligence purposes”. According to a report published by Wall Street Journal on June 11, 2015, Tehran “formalized” its partnership with the Taliban in early 2014, when it opened an office for the terrorist group in Iran. Last October, a Taliban official told Pakistan’s Express Tribune that Maulvi Nek Muhammad, a veteran Taliban leader, was the group’s special envoy to Iran. Last year, a Taliban delegation, led by the group’s military commission chief Ibrahim Sadr, also visited Tehran to “seek military aid.”

According to Voice of America, “the Afghan Senate said on December 5, 2016 that it will investigate growing military ties between Taliban insurgents and Iran and Russia. Asif Nang, the governor of western Farah province said that families of a number of high ranking Taliban leaders reside in Iran and bodies of Taliban fighters who were killed in recent clashes in the provincial capital have been transported to their families in Iran. Lawmaker Jumadin Gayanwal said that Iran has supplied the group with weapons that could target and damage tanks and planes.”

A report titled “Iranian Taliban?” published by Afghanistan’s largest daily Hasht-e Sobh on November 14, claimed that “the Iranian government had recently put a military training facility inside Iran at the disposal of the Taliban.” A 2014 report by Pentagon detailed Iranian military support to Taliban. According to WSJ, “Afghan security officials said they had clear evidence that Iran was training Taliban fighters within its borders. Tehran now operates at least four Taliban training camps in the Iranian cities of Tehran, Mashhad and Zahedan and in the province of Kerman.”

The Iranian approach to Taliban has considerably evolved during the past two decades. In the late 1990s, when the group seized power in Kabul, Iran considered it as a threat and backed anti-Taliban forces. But, after 2001 when the US and its allies overthrew the Taliban regime, Iran changed its position as it considered the US presence a bigger threat. After 2001, Iran provided sanctuary to many leaders of the group and later helped them to reorganize against the United States and its allies in Afghanistan.

In 2007, after the US signed a partnership agreement with Kabul allowing American forces to stay in Afghanistan, Iran ramped up its support to Taliban. The US Department of State’s “Country Reports on Terrorism” for 2012 asserts that “Iran has arranged arms shipments to select Taliban members, including small arms and associated ammunition, rocket propelled grenades, mortar rounds, 107mm rockets, and plastic explosives… In 2012, the Iranians shipped a large number of weapons to Kandahar, Afghanistan, aiming to increase its influence in this key province.” The report adds that the Revolutionary Guards’ Quds Force “trained Taliban elements on small unit tactics, small arms, explosives, and indirect fire weapons, such as mortars, artillery, and rockets.” A series of Treasury Department terror designations reveals the relationship between the IRGC-QF and the Taliban.