Iran is currently suffering from shortage and lack of water and certain policies have been put in place by the Iranian government that put the country in the current situation.Here is a look at the causes behind lack of water in Iran 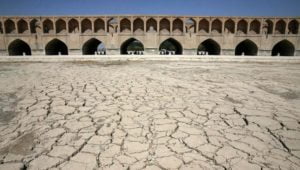 1- One of the causes of water scarcity in southern Iran and the rest of the country is because of extensive and generally non-scientific dam building by Iranian Revolutionary Guards (IRGC). The lands that have been dried up by these dams are grounds for particulate storms.

2- One example is the Gotvand Dam in Khuzestan. The dam was built on a salty ground. Environmentalists warned at the time of construction, that the water that will be built up behind the dam will dissolve the salt bed and turn it into salt water. However, the project continued, and the result was that not only the water behind the dam became salty water, but also many of Khuzestan’s land suffered irreparable damage due to water salinity. It is estimated that water salinity will continue for at least over a decade. The Gotvand dam project was in the hands of the Revolutionary Guard Corps (IRGC). The IRGC has a large economic establishment called the Khatam-ol-Anbia Construction Base. The IRGC has a specialized company in the field of dam building called Sepasad. The IRGC has earned huge revenues in this area, and under the cover of economic work, is financing its forces in the war in the region. Giving economic projects in Iran to the Revolutionary Guards is an excuse to transfer funds to the IRGC, but one of the consequences for the Iranian people is the drought caused by the IRGC projects.

Hackers Linked to Iran Attack U.S. Officials to Retaliate for Sanctions What Will Iran's Looming Civil War Look Like?

On 3rd of January a news spread in social media regarding Qasem Soleimani and AbuMahdi Mohandes who has died by a US drone strike near Baghdad Airport and this was the end of their lives. In social media, especially Iranian users, there was a chaotic situation, some called of “the general of... END_OF_DOCUMENT_TOKEN_TO_BE_REPLACED