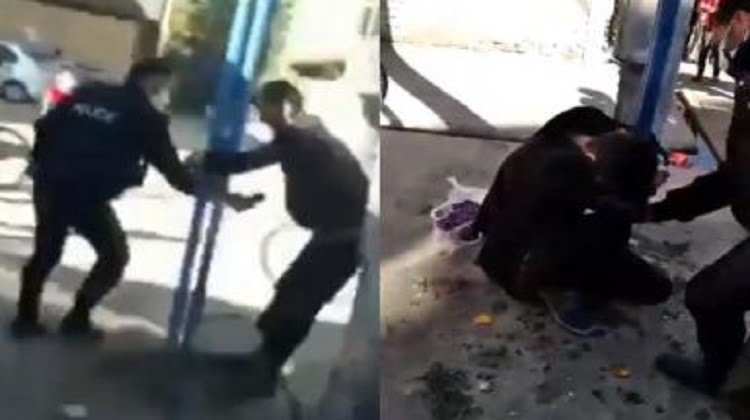 The video was first posted on Saturday shows police officers beating a man who has fallen on the ground in a street in the city of Esfarayen. The witness who filmed the incident can be heard on the video saying the police shot the man.

The victim has been identified as Mohsen Minbashi, 37. It is still not clear why the police had been pursuing the victims or why they shot him.

On Sunday, the Military Prosecutor of North Khorasan Province Mojtaba Zare’ was quoted by the media that the family of the victim has filed a complaint for the police shooting. According to Zare’, the forensic department is carrying out a post-mortem to determine the cause of death and injuries and CCTV footage from the area is being examined to shed light on the circumstances of the incident.

On October 20 police arrested and repeatedly assaulted another man, Mehrdad Sepehri, with pepper spray and shocker in the eastern city of Mashhad. The victim reportedly died of pepper spray injury in the police car on the way to the hospital. A video posted on social media showed Sepehri tied to a pole on the street while a police officer tortured him for 45 minutes before taking him away. While his brother told Iran International Television that police arrested Sepehri for a domestic disturbance, officials have been trying to portray him as an addict.

Many social media users have compared the incident with the murder of George Floyd in Minneapolis, Minnesota in May that lead to nationwide protests in the United States. Iranian hardliners used the killing as proof of racism and police violence against non-white Americans in their anti-US propaganda.

Killing of detainees by the police in Iran has increased in the past few weeks. At least three cases were documented in October of deaths under torture or by shooting of detained individuals. Authorities either try to make the vicitims responsible for their own deaths or make promises of investigations. But the country’s conservative Judiciary which closely collaborates with the police and intelligence agencies rarely issues a report after such killings.