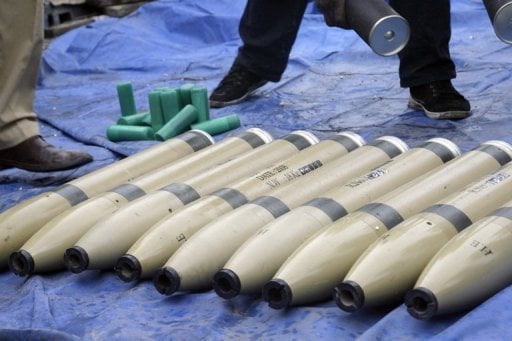 LAGOS — An illegal arms shipment including rockets and grenades discovered in Nigeria this week was loaded in Iran by an Iranian trader, the firm that operates the vessel that delivered it said on Friday.

Security agents this week intercepted 13 containers declared as building materials and discharged from the CMA CGM Everest vessel at the country’s busiest port of Apapa in Nigeria’s economic hub of Lagos.

“The shipment in question was booked as a ‘shippers owned container’ and supplied loaded and sealed by the shipper, an Iranian trader who does not appear on any ‘forbidden persons’ listing,” said CMA CGM, which operates the Marshall Islands-flagged vessel.

CMA CGM, based in France, said the containers were loaded in Bandar Abbas, a southern port city of Iran, and discharged in Lagos in July.

But last week the shipper asked to have the containers reloaded and sent to the Gambia, a tiny west African country wedged inside Senegal, according to the firm.

Clearance had been obtained before Nigerian customs intervened and halted the shipment, according to CMA CGM.

Iranian embassy officials in Nigeria refused to comment, saying a statement would be issued later.

A Nigerian intelligence agency spokeswoman has said authorities were on heightened alert following October 1 twin car bombings in the capital that killed at least 12 people.

Ten of the containers opened so far contain an array of weaponry, customs spokesman Wale Adeniyi said, despite being declared as building materials.

CMA CGM said it has been cleared of any involvement in the illegal shipment and called itself the “victim of (a) false cargo declaration.”

Two people have reportedly been arrested in connection with the cargo, but security officials have not confirmed the reports.

Authorities have publicly refused to speculate on the origins or destination of the shipment, coming just months before presidential elections, but have heightened port security.

“Certainly security at the ports has been beefed up and we are trying to move up ahead … and tighten our own systems to block such shipments,” Adeniyi told AFP.

Regarding paperwork for the shipment that contained the weapons, Adeniyi said “the documents were irregular… and we felt that the names given on them were false.”

Precise quantities of the weapons will be known after all the containers are opened, he said.

The ship’s last port of call before arriving in Nigeria was India’s Jawaharlal Nehru port near Mumbai, the customs service has said. The vessel berthed in the Nigerian port on July 10 and sailed out on July 15.

Illegal weapons are widespread in Nigeria, and the discovery has sparked fresh concerns with presidential elections set to be held early next year. Ballots have frequently been tainted by violence in the oil-rich nation.

Militants in the Niger Delta, the country’s main oil-producing region, have carried out scores of attacks there in recent years.

The Movement for the Emancipation of the Niger Delta, the country’s most prominent militant group, claimed the October 1 car bombings.

A series of attacks have also been carried out by suspected members of an Islamist sect, known as Boko Haram, in the country’s north in recent months.

On 3rd of January a news spread in social media regarding Qasem Soleimani and AbuMahdi Mohandes who has died by a US drone strike near Baghdad Airport and this was the end of their lives. In social media, especially Iranian users, there was a chaotic situation, some called of “the general of... END_OF_DOCUMENT_TOKEN_TO_BE_REPLACED