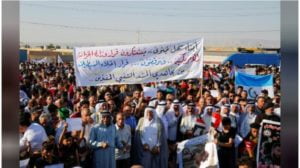 Brigade 30’s refusal to abandon its positions on the eastern edge of Mosul — instead it cut off roads and whipped up angry protests — underlines Baghdad’s struggle to assert its authority and raises the risk of further instability in a region marked by U.S.-Iranian rivalry.

Washington warned this year it would take action against Iran-backed militias if Baghdad failed to control them, and imposed sanctions on groups and their leaders, including Brigade 30’s Commander Waad Qaddo. It blamed paramilitaries for attacks on bases hosting U.S. forces in May.

Tension ramped up in the past month when alleged Israeli air strikes hit weapons depots and bases of paramilitary factions in western and central Iraq. Israel has hinted it was involved but has not explicitly said so. The Israeli military declined to comment.

Paramilitaries in turn accuse the United States of helping Israel attack their positions, and have threatened to retaliate.

The Pentagon denies involvement. No evidence has been provided for the mutual allegations.

Rivalry between Iraq’s two biggest allies, Tehran and Washington, has put the region on edge this year. Oil tankers in the Gulf have been attacked and Israel has bombed Iranian allies in Syria.

If Iraq cannot rein in its paramilitary groups, which have more than 100,000 members, there could be further violence, Iraqi officials and analysts say.

In parts of Salahuddin province, north of Baghdad, flags of some factions still fly at checkpoints and paramilitaries man roadblocks in neighboring Anbar province.

The armed groups dominate local security in some towns and cities across the country, especially territory formerly occupied by Islamic State (IS) militants. Their allies, meanwhile, occupy parliamentary seats, exercising new political strength that has deepened their influence on the government.

On 3rd of January a news spread in social media regarding Qasem Soleimani and AbuMahdi Mohandes who has died by a US drone strike near Baghdad Airport and this was the end of their lives. In social media, especially Iranian users, there was a chaotic situation, some called of “the general of... END_OF_DOCUMENT_TOKEN_TO_BE_REPLACED