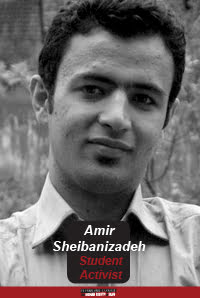 Amir Sheibanizadeh, a Mashad student who was banned from continuing his university education, talked to the International Campaign for Human Rights in Iran about his trial session, held on Monday, 1 August. “A few days ago, they called me to let me know that the upcoming trial session would be regarding the 14 July 2008 protest case against me, for which I was sentenced to eight years in prison. Though I could see the case folder before the Judge, fortunately this case was not brought up at all, and they only questioned me about my other case, which has to do with my participation in a 14 February gathering,” Sheibanizadeh told the Campaign.

Sheibanizadeh, 23, is a banned student who has been arrested repeatedly in the past few years. He was first arrested during a 14 July 2008 protest in Mashad’s Mellat Park. After spending two weeks in a solitary cell, he was transferred to Vakilabad’s Security Ward and was released later on an $80,000 bail. Regarding the 14 July 2008 case, he was recently sentenced to eight years in prison by Branch 4 of Mashad Revolutionary Court.

“Today [Monday], I was in court with four other people who were also arrested for their participation in the 14 February gathering in Mashad. The others were both students and regular people. My charges were ‘acting against national security through illegal assembly on 14 February,’ and ‘propagating against the regime’ for two reasons: one for talking to JARAS website, and the other that after my arrest I had raised my hands showing the ‘V’ sign. I accepted none of my charges and said that I have not lied and I have not done anything wrong. I participated in a walk in support of the people of Egypt and attending it was my Sharia and human right,” he told the Campaign.

“Mr. Sadafi, the Branch 4 Judge at Mashad’s Revolutionary Court, treated me very respectfully and allowed me to defend myself. Now I don’t know what could happen and what ruling will be issued. Others said that they were satisfied with their trial session, too, having been able to defend themselves,” added Sheibanizadeh.