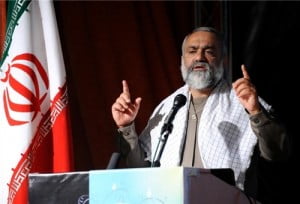 Commander of the Basij (volunteer) Force Brigadier General Mohammad Reza Naqdi described the British embassy in Iran as a “spy den” due to its role in the 2009 post-election unrests, and said the British are desperately seeking to bring back Iran under their reign, although to no avail.
Naqdi referred to the British embassy’s role in the 2009 post-election unrests in Iran, and said, “The people (in Iran) are entitled to know about the role of the British spy den in those bitter events.”

“The filthy monarchical British regime still feels pitty for the black era of colonialism and it wishes to find new Khans to follow the footsteps of its former servants like Reza Khan (the father of Mohammad Reza Pahlavi, the last king of the Pahlavi dynasty in Iran who was toppled in the 1979 Islamic Revolution in the country) and rule the Iranian people and it wishes to return to the black era of colonialism by sowing discord and creating distance between the Iranian people and the pivot of Islam and unity, but it will take this wish to the grave,” he said, addressing Iranian war veterans in Tehran on Wednesday.

Relations between Iran and Britain hit an all-time low in November 2011, when the two countries shut down their diplomatic missions around Britain’s key role in the imposition of a new set of Western sanctions against Iran and its repeated meddling with Iran’s domestic affairs.

On November 27, 2011, Iranian lawmakers voted by a large majority to downgrade diplomatic ties with the United Kingdom, in response to Britain’s decision to impose sanctions on the Central Bank of Iran over the allegation that Iran is pursuing non-civilian objectives in its nuclear energy program.

Two days after the decision by the Iranian parliament, hundreds of Iranian students staged a protest outside the British Embassy in Tehran and pulled down the UK flag.

On November 30, 2011, London cut off its ties with Tehran, withdrew its diplomatic staff from Iran and the Iranian Embassy in London was closed.

Iran recalled all its staff and closed its embassy in London the same day Britain recalled its diplomatic mission in Tehran due to massive protests in front of the British embassy complex by thousands of Iranian students who demanded a cut of ties with London.

The Iranian students’ November 2011 protests at the British mission came after the Iranian legislators in an open session of the parliament the same month approved the bill of a law on downgrading relations with Britain. After the parliament approval, Iran expelled the British ambassador from Tehran.

The parliament approval came a week after the US and Britain targeted Iranian financial sectors with new punitive measures, including sanctions on Iran’s Central Bank and petrochemical industry.

The sanction against CBI and Iran’s petrochemical industry was adopted in a unilateral move by the US, Canada and Britain outside the UN Security Council as other council members, specially Russia and China, had earlier warned against any fresh punitive measure, including sanctions, against Iran.

The British government has also embarked on delisting the anti-Iran terrorist Mojahedin-e Khalq Organization (MKO) from its list of terrorist groups.

The Iranian lawmakers initially started drafting a bill to downgrade ties with London after Britain’s direct involvement in stirring post-election unrests in Iran in 2009, but they intensified and accelerated the move after Simon Gass, the then British ambassador to Tehran, criticized the human rights situation in Iran.

“Today, International Human Rights Day is highlighting the cases of those people around the world who stand up for the rights of others – the lawyers, journalists and NGO workers who place themselves at risk to defend their countrymen,” Gass said in a memo published by the British Embassy in Tehran on December 9, 2010.

“Nowhere are they under greater threat than in Iran. Since last year human rights defenders have been harassed and imprisoned,” Gass added.

Following Britain’s support for a group of wild demonstrators who disrespected Islamic sanctities and damaged private and public amenities and properties in Tehran on December 27, 2009, members of the parliament’s National Security and Foreign Policy Commission drafted bill of a law requiring the country’s Foreign Ministry to cut relations with Britain completely.

The British government’s blatant stance and repeated remarks in support of the unrests inside Iran and London’s espionage operations and financial and media support for the opposition groups are among the reasons mentioned in the bill for cutting ties with Britain.

Then in a meeting at the UN Headquarters in New York City on September 23, last year Iranian Foreign Minister Mohammad Javad Zarif and his British counterpart discussed improvement of Tehran-London relations, Iran’s nuclear energy program as well as regional developments.

Following a set of talks between the two sides, Tehran and London eventually agreed to resume diplomatic relations and announced the names of their non-resident charges d’affaires in October 2013.

Prisoners of Conscience Will Not Be Transferred to Gharchak Prison, Says Sotoudeh’s Husband

132 prisoners at risk of imminent execution in Isfahan