Basij Commander Calls For Including “Culture of Martyrdom” In Textbooks

Mohammad Reza Naghdi, Commander of Iran’s Basij Force, says the ‘values’ of sacred defense need to be taught in schools. 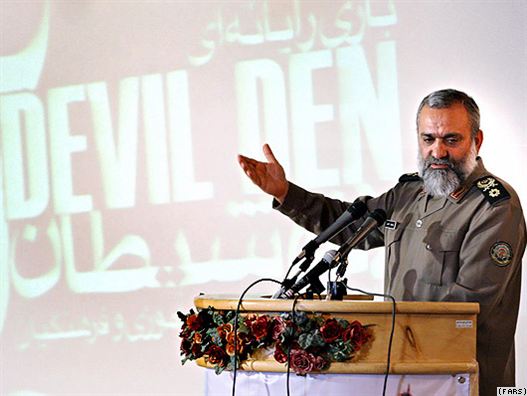 The Commander of Iran’s Basij Force, Mohammad Reza Naghdi, has said that pro-government forces are calling on the Education Ministry to include “the culture of self-sacrifice and martyrdom” in school textbooks.Martyrdom and self-sacrifice were highly promoted during the 1980-1988 Iran-Iraq war, when thousands of school children were sent to the front and promised that by dying as martyrs, they would go straight to heaven.Naghdi said the Basij force want to bring the “values” of the sacred defense (a reference to the war with Iraq) to classrooms and textbooks. He said the move is part of the Basij’s measures to counter the “soft war” Iranian officials say the country’s enemies have launched to destabilize the Islamic establishment and lead to its downfall.

(Read more on Iran’s warning over a ‘soft war’)

“The course of defense that has been taught at schools and high schools for the past two years is somewhat dry and classic,” said Naghdi. He added that by including the “culture of martyrdom,” the textbooks will be transformed.

He also said that the Basij force is trying to have a more “direct role” in the preparation and compilation of textbooks, including those dealing with the issue of defense.

Iran’s Education Minister, Hamid Reza Haji Babayi said earlier this year that “the culture of the sacred defense” should be included in school books:

“I don’t believe that the culture of martyrdom and self-sacrifice has not been transferred to our third and fourth generation. In case of war, the youth we have today will be nothing less that than [those who acted] in the time of war.”

A Tehran based expert on education, Shirzad Abdollahi, told the BBC that “martyrdom and self-sacrifice” have in some form been part of schools’ curriculum.

“Some think repeating an issue in schoolbooks demonstrates its importance, while it can actually lead students to have a negative view about it.”

In recent months, Iran has increased efforts to ideologically indoctrinate schoolchildren, including setting up Basij centers at elementary schools. There are reportedly also plans for clerics to be permanently based in schools to answer religious questions.

A mother of a seven-year-old boy in Tehran, who described the efforts as “brain washing,” expressed doubt over the impact of the measures.

“These things have been going on for 30 years. Have they made us the way [Iranian leaders] want us to be? Of course not. These moves will backfire and lead to more frustration among our children,” said the mother, who spoke to Persian Letters on condition of anonymity.

Will Iran drink from the ‘poisoned chalice’ once again?

ISRAEL SAYS IT CAN FIGHT MORE THAN ONE WAR AT A TIME, TELLS IRAN TO ‘GET OUT’ OF SYRIA

US claims on religious minorities’ rights in Iran biased: Bishop