Jul 10, 2019 IRGC, Politic, Slider Comments Off on It Is Immoral and Illogical to Blame the US for Iranian Aggression

Many critics of the Trump administration have made the argument that the U.S. decision to remove itself from the Joint Comprehensive Plan Of Action (JCPOA) and to reimpose sanctions on Iran has unnecessarily provoked Iran. 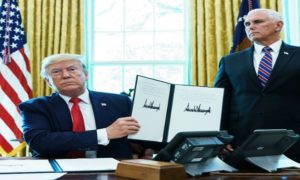 Supposedly, it is because of these unnecessary provocations that the Iranian regime has unleashed the Islamic Revolutionary Guard Corps (IRGC), and its Iranian proxy terror groups on international shipping in the Persia Gulf, the Gulf of Aden, and the Red Sea, thereby endangering the world’s oil supply. They have also prompted the IRGC to shoot down a U.S. drone.

However, this argument is simply not true.

First of all, legally and morally speaking, it makes no sense to blame the U.S. for the Iranian regime’s aggression.That is because we don’t assign blame to the non-violent party for “provoking” the intentional violent actions of the other party, under U.S. law, or under international law. Otherwise, we would be encouraging and excusing violence. And regardless of whether you agree with these actions, removing the U.S. from a political document like the JCPOA — which is not even an executive agreement — and re-imposing U.S. sanctions are both legal and non-violent acts.

Perhaps another example will make it clearer.

Osama Bin Laden declared war against the U.S. in 1998, citing a number of reasons. Among them — the presence of American troops in Saudi Arabia, U.S. support of Israel, and the economic sanctions the U.S. imposed after the 1991 Gulf War against Saddam Hussein’s Iraq. Does that mean that the U.S., which indeed did these three things, provoked the September 11, 2001 attacks? No serious person would ever make this argument.

Second, since the founding of the Iranian regime in 1979, the regime has consistently supported terrorism against the U.S. and other nations. Thus, the regime’s support for terror far precedes both U.S. sanctions and the JCPOA.

Trump’s way out of Iran issue lies out of bilateral issues “A nasty, brutal fight”: what a US-Iran war would look like

On 3rd of January a news spread in social media regarding Qasem Soleimani and AbuMahdi Mohandes who has died by a US drone strike near Baghdad Airport and this was the end of their lives. In social media, especially Iranian users, there was a chaotic situation, some called of “the general of... END_OF_DOCUMENT_TOKEN_TO_BE_REPLACED