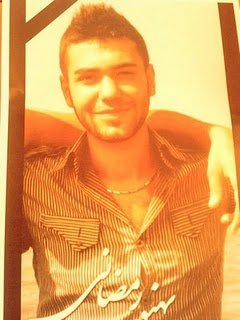 Last night, Behnoud Ramezani was in the Narmak area in Tehran around Square 22, when he was attacked and killed by Basiji forces in Tehran.

It was around 10 PM local time, a number of young Iranian’s were heading back home from after celebrating Char Shambeh Soori ( The Iranian Fire festival),when  Basiji forces mounted on  Motorcycles attacked and beat the defenseless youths  with electric batons .

Apart from myself, there were several others witness as well, and after hearing our screams and cries for help others soon arrived at the scene.

Two of the basijis abandoned their motorcycles and escaped with the help of other basijis on motorcycles.

10 minutes later an ambulance arrived and brought Behnoud to the hospital and his friends followed the ambulance with their own cars. After 30 minutes the staff at Al-Qadir hospital told us that his condition was critical, and there was little hope.

Today, when I went to the same place and asked people about last nights situation, everyone told me that they didn’t know anything! It was very strange for me!

After searching awhile in his neighborhood, finally I saw some  of his friends with his picture in their arms and they told me that he had died.

I asked them about Behnoud, and they told me that he was student at Mechanical Engineer  University in the Northern part of Iran, but he was from Tehran-Pars area in Tehran, and since he was a close friend of ours, he had come to visit us, but unfortunately he was killed by basiji forces!!

The morning after the attack on Iran

ANALYSIS: IDF’s new gamechanger doctrine in the war against Iran