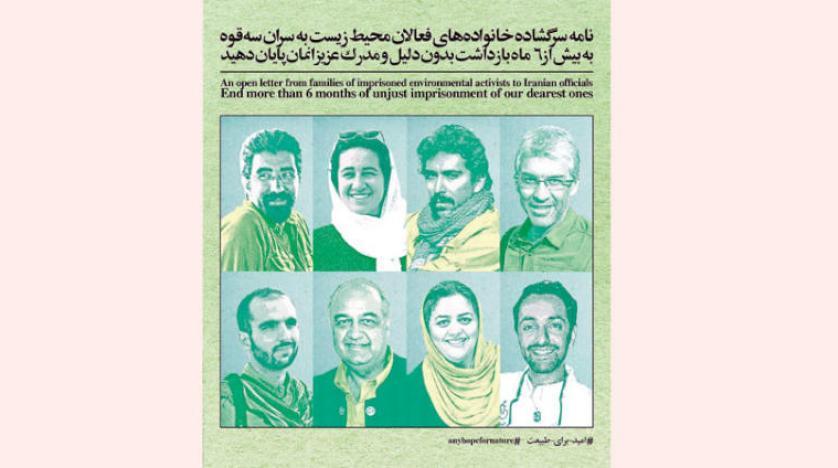 Social media users have interacted regarding the issue of eight environmentalists facing security charges in Iran, one week after they started a hunger strike. Two hashtags were launched to pressure Iran to release the activists.

Kaveh Madani, water management expert, tweeted that 564 days have passed since arresting the activists, and eight days since the hunger strike. He stressed that their only demand is to work based on justice.

Human Rights Watch said last week that the authorities should immediately release all eight environmentalist experts detained for over 18 months without being provided with the evidence concerning their alleged crimes.

“Members of the Persian Wildlife Heritage Foundation have languished behind bars for over 550 days while Iranian authorities have blatantly failed to provide a shred of evidence about their alleged crime,” said Michael Page, deputy Middle East director at Human Rights Watch.

“The authorities should take the long-overdue step of releasing these defenders of Iran’s endangered wildlife and end this injustice against them,” Page added.

HRW quoted a reliable source as saying that the environmentalists on hunger strike are demanding that authorities end their legal limbo and either release them on bail until a verdict is issued against them or transfer them to the public ward of Evin prison.

They are inward 2-Alef of Evin prison, which is under the supervision of the IRGC’s Intelligence Organization, the source added.

Their trial in Branch 15 of Tehran’s revolutionary court was halted before March, then resumed at the beginning of August. The court reportedly did not allow lawyers to review the evidence before the trial opened on January 30.

Article 48 of Iran’s 2014 criminal procedure law says that detainees charged with various offenses, including national or international security crimes, political, and media crimes, must select their lawyer from a pre-approved pool selected by Iran’s judiciary during the investigation.

IDF: IRAN FIRED MISSILE FROM SYRIAN AREA WE WERE PROMISED IRAN HAD LEFT