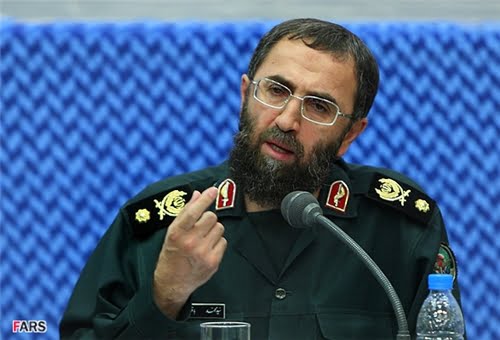 TEHRAN (FNA)- Brigadier General Seyed Mohammad Baqerzadeh, the head of Iran’s committee in charge of searching for those missing in action, underlined that capture of the Israeli soldier, Shaul Aron, is a winning card in the hands of the Palestinian resistance movement, Hamas, in its campaign against the Zionist regime.

“At present the capture of Shaul Aron by the Palestinian fighters is a valuable reserve for the freedom of a remarkable number of Palestinian prisoners and can be used for strengthening the bargaining chip against the Zionist regime,” Baqerzadeh told FNA on Monday.

Brigadier General Seyed Mohammad Baqerzadeh, the head of Iran’s committee in charge of searching for those missing in action

He said the capture of Aron has increased the risk factor for the Zionist regime.

Baqerzadeh said that the high morale of the Palestinian fighters heralds a cumbersome situation for the Zionist regime in the coming days.

The Hamas-affiliated al-Qassam Brigades said on Sunday night that it had captured an Israeli soldier, the first since the release of Gilad Shalit in 2011.

Al-Qassam Brigades Spokesman Abu Ubaida said that the captured soldier is named Shaul Aron and his military number is 6092065.

The fact that they did not announce (the loss of the soldier) shows that they were trying to hide their losses,” the spokesman said in the speech, noting Israel’s lack of response.

In relevant remarks on Saturday, Baqerzadeh revealed that the Zionist regime is hiding the corpses of those Israelis killed by the Palestinians’ retaliatory attacks on the occupied territories.

The Zionist regime’s casualties are gradually increasing and the regime has faced a new challenge for hiding the number of its casualties,” he told FNA.

Baqerzadeh said that reports from the occupied territories said that the Zionist regime is seeking to transfer the corpses of those killed in the Palestinians’ attacks to unknown places in the deserts near Ashkoul and Tel Aviv and in the back of ambulances which go to the two cities’ hospitals at night.

Noting that the Zionist regime is building new cemeteries in the deserts, he said that the regime has obliged all the Israeli hospitals to keep the corpses of all those killed in Palestinian attacks for some days to be buried in specified places by the security forces.

His remarks came as the Palestinians launched some 1,400 rockets into Israel by now and the Israeli news sources have strictly been banned by the regime from announcing the number of the Israelis killed in the Palestinians’ missile attacks.

Israel has been pounding the blockaded Gaza for 14 consecutive days, killing at least 478 people and injuring more than 3,000 others.

Four out of every five Palestinians killed during Israel’s ongoing military offensive in Gaza have been civilians, including dozens of women and children, the United Nations said last Monday.