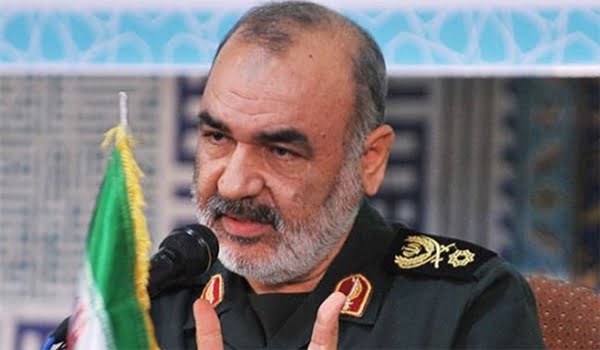 Commander: Iran’s Enemies Weaker Than Ever

“At present, the Islamic Republic of Iran is more powerful than ever before,” he said, addressing a local gathering in the Northern province of Semnan on Thursday.

He underlined that the nation’s enemies are at their weakest position.

The IRGC is fully ready to thwart any plots and foreign meddling in the country’s internal affairs, he said.

In relevant remarks in late May, Salami had underlined that while Iran is making progress in different fields, its enemies are on the verge of collapse.

Addressing a local gathering in Tehran, he pointed to the Islamic Republic of Iran’s achievements in various fields, and added the enemies are on the verge of collapse.

Salami said that the IRGC forces always have been forerunner in defending the Islamic Iran and Revolution.

The commander stressed that the IRGC forces always have stood against various threats posed by the enemies of the Islamic Republic and Revolution.

Defense analysts and military observers say that Iran’s wargames and its advancements in weapons production have proved as a deterrent factor, specially at a time of heightened threats by Israel and the US.

Tehran launched an arms development program during the 1980-88 Iraqi imposed war on Iran to compensate for a US weapons embargo. Since 1992, Iran has produced its own tanks, armored personnel carriers, missiles and fighter planes.