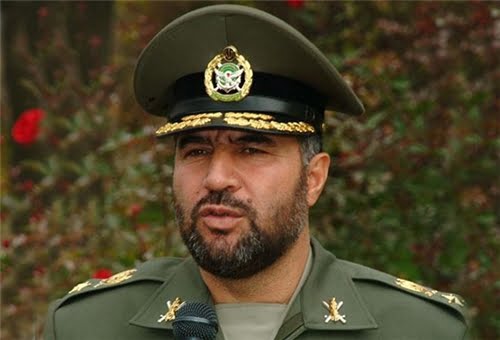 “We don’t assume any threat posed to our borders since the Iranian nation and the country are awake and they enjoy full vigilance under the guardianship of Velayat (Supreme Leader of the Islamic Revolution Ayatollah Seyed Ali Khamenei) and we also act upon our responsibility,” Heidari told reporters in Tehran on Sunday.

He, meantime, said Iran always monitors its borders vigilantly and has recently tightened border controls to give a crushing response to any possible threats.

Heidari referred to the recent events in Iraq and the terrorist attacks in the neighboring country, and said what is happening in the regional states is a part of the plots hatched by the arrogant powers and the Zionist regime.

In relevant remarks on Saturday, Commander of the Iranian Border Guards Units General Hossein Zolfaqari announced that his forces have intensified security measures along the country’s Western borders with Iraq in a bid to prepare for any unexpected conditions.

“All the possible outcomes for any type of activity along the country’s Western borders have been studied and we are prepared for confronting any possible conditions,” General Zolfaqari said.

He noted that some Iraqi citizens may look for a safe haven in Iran due to inclement conditions in their country, “and we have offered some proposals to the officials in this regard”.

Earlier in the day, Iranian President Hassan Rouhani warned of Iran’s tough confrontation with the ISIL (the Islamic State of Iraq and the Levant) or any other terrorist group which might come close to the Iranian borders, and said, “If a terrorist group approaches our borders, we will definitely confront it, because our duty is defending our territorial integrity and national interests.”

Yet, Rouhani rejected alleged reports on the deployment of Iranian troops in Iraq, but said Tehran is ready to help its Western neighbor in its war on terrorists based on the international laws if requested by Baghdad.

“We, as the Islamic Republic, are Iraq’s friend and neighbor and have good relations with the Iraqi government and nation,” Rouhani told reporters in a press conference in Tehran.

The US Wall Street Journal in a report on Friday claimed that Tehran has sent two elite units of its Islamic Revolution Guards Corps (IRGC) to Iraq to fight against the Islamic State of Iraq and the Levant (ISIL, also known as ISIS) terrorists – an Al-Qaeda offshoot.

A few hours later, Iranian Deputy Foreign Minister Hossein Amir Abdollahian categorically rejected the report, and told FNA that “the dispatch of Iranian military forces to Iraq is not true”.

Several other Iranian officials have also rejected the report in the last two days. Foreign Minister Mohammad Javad Zarif said Tehran is deeply concerned over the ongoing bloodshed by the ISIL terrorist group across Iraq, but it has not dispatched its forces to Iraq.

In an interview with the New Yorker on Friday, Zarif denied reports that Tehran has already dispatched battalions of the Islamic Revolution Guards Corps (IRGC) to Iraq to aid and protect Prime Minister Nouri al-Maliki’s government.

Interior Minister Abdolreza Rahmani Fazli also said Iran is willing to support its neighbors against the flow of Takfiri and terrorist groups, but not by sending military forces to those countries.

“Such supports do not mean dispatching forces, but condemning terrorist moves and closing the borders are their meaning,” the Iranian interior minister said, addressing the administrative council meeting of North Khorassan province on Saturday.