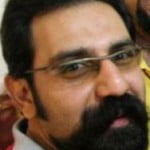 Despite the completion of his interrogation, reporter and photojournalist Reza Entesari remains detained inside Evin Prison’s Ward 209. “The Investigative Judge converted his temporary detention orders to bail orders. But despite completion of his interrogations, as he is unable to post the $50,000 bail, he remains in temporary detention inside Evin Prison’s Security Ward 209,” a source close to the case told the International Campaign for Human Rights in Iran.

“Considering Mr. Entesari is a regular reporter and is obviously unable to come up with the bail amount, we would like the judge to change the bail order to one of custodianship [where the prisoner is released to the custody of a court-approved individual], so that he is released,” said the source on condition of anonymity.

Freelance photojournalist Reza Entessari, a former photography student at News University, was arrested on 5 September along with several Gonabadi Dervishes, and was transferred to Intelligence Ministry’s Ward 209 at Evin Prison.