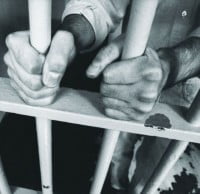 Death row political prisoner Ali Afshari is in critical condition after suffering an internal bleeding as a result of torture in the Central Orumieh Prison.

According to reports, a few days after Afshari was injured while being tortured by prison officials, he was transferred to a hospital outside of prison but was returned to prison after getting treatment.

He is suffering from internal bleeding and is in critical condition.

This Kurd prisoner was sentenced to death on charges of enmity with God by the Mahabad Revolutionary Court. (Human Rights Activists in Iran – Jan. 24, 2012)