Jan 18, 2019 Politic, Politics, Quds Force, Slider Comments Off on Does Iran Have the Means to Further Expand Its Influence Throughout the Middle East?

Let’s start with the basics. In the first months of 2018, Iran exported about 2.6 million barrels a day of crude oil and other petroleum products, worth about $4 billion per month. After November 4, U.S. sanctions on Iran came into effect, cutting oil exports in half. While the intent was to completely cut off Iranian oil exports, the U.S. gave 90-day waivers to eight major Iranian oil importers. 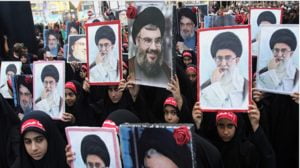 With the U.S. sanctions in place, Iran’s oil revenues are expected to fall by half in 2019, in the best case. With this in mind, the Rouhani government introduced a tight budget for FY2019–2020 (starting March 20, 2019). Expenditures are budgeted at $103 billion, which represents a 12 percent nominal increase (measured in rials). Oil revenues, which are officially projected at $30 billion (based on exports of 1.5 million barrels a day at $54 the barrel) are expected to cover about one quarter of total expenditures. However, the oil revenue numbers seem to be overestimated by at least 25 percent, and could be even lower if the Trump administration does not renew the waivers.

Even without the sharp drop in revenues, Iran did not have the economic means to finance its support for the Assad regime and Hezbollah—the main recipients of Iran’s largesse—estimated to cost Iran several billion dollars a year. Moreover, this support is highly unpopular at home. Nevertheless, backing Assad and Hezbollah are key elements in the regional strategy of regime hardliners. With the U.S. withdrawal from Syria, Iran might be tempted to try to extend its influence. But this will become increasingly costly, with diminishing returns, at a time when Iran’s domestic economic woes are reaching a boiling point.

Jean-François Seznec | Scholar at the Middle East Institute in Washington, D.C. and adjunct professor at the Johns Hopkins School of Advanced International Studies

Iran’s ambitions in the Middle East include financing Iraqi militias and Hezbollah in Lebanon, supporting the Assad regime in Syria, and helping the Houthis in Yemen. At the same time, Iran is arming the various branches of its own large military and security forces.

All these efforts have cost tens of billions of dollars. However, Iran’s income, which depends on oil and gas, is down. The U.S. sanctions on Iran could limit the country’s oil exports to about 1 million barrels a day, which would cut into Iran’s income by over $32 billion. Iran, proud to have the largest gas reserves in the world, is unable to bring enough supply to its own market and can only export minimal amounts, all due to a lack of foreign technology and investment.

It appears that Iran’s continued efforts to expand its influence in the region are totally undermining its economy. Thus, Iran’s ambitions to impose its hegemony over the region are ensuring that it remains an irritating but second-rate power.

Iran has been for millennia a regional influence and will remain so. U.S. sanctions are severely restricting government revenue and emboldening those in Tehran who champion the evangelism of the 1979 revolution. In contrast to the Trump administration, Europe wants to draw Iran into the global economy and multilateral arrangements, including keeping it in the nuclear deal of 2015. Tehran also has businesslike relations with Turkey, Russia, China, and others. Iran’s international influence is limited by the Shi‘a character of the Islamic Republic, which sits uneasily with Sunni majorities in the Arab and Muslim worlds, although its egalitarian rhetoric and support for Palestinian groups find echoes that trouble Sunni autocrats. This is not primarily about resources—Iran’s military spending, for example, is perhaps 20 percent of Saudi Arabia’s and half of the United Arab Emirates’—but of politics. Portraying Iranian influence as inherently “bad,” or responsible for all regional ills, is unrealistic and probably self-defeating.

On 3rd of January a news spread in social media regarding Qasem Soleimani and AbuMahdi Mohandes who has died by a US drone strike near Baghdad Airport and this was the end of their lives. In social media, especially Iranian users, there was a chaotic situation, some called of “the general of... END_OF_DOCUMENT_TOKEN_TO_BE_REPLACED