Posted By: crazydeadon: November 04, 2009In: History of IRGC
Print Email 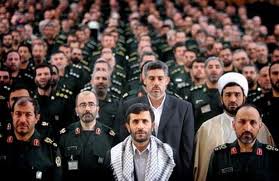 The Basij, a paramilitary volunteer militia loyal to Iranian Supreme Leader Ayatollah Ali Khamenei and operating under the Iranian Revolutionary Guard Corps, was founded to ensure the survival of the regime against foreign and domestic threats. The Basij has leaders based in mosques in every village and city throughout Iran, giving it the widest security network in the country. During the Iran-Iraq War tens of thousands of Basij members were killed on the battlefield when they volunteered to clear minefields. Following the war, the Basij were used throughout the 1990s to quell internal dissent, crackdown on student protests and enforce the regime’s strict moral code.

The Basij is widely viewed as playing a large role in the 2005 election of Mahmoud Ahmadinejad – himself a former Basij member – as President of Iran. More recently, the Basij noticeably took the lead in crowd control in June 2009 when tens of thousands of Iranians demonstrators took to the streets to protest alleged electoral fraud in Ahmadinejad’s reelection. In the ensuing weeks of rioting, Mir Hussein Moussavi, the opposition presidential candidate, decried the violence carried out by the Basij against protestors. Saying that the Basijis lack uniforms, proper identification or anything that denotes them as public employees, Moussavi said they appeared with hoses, clubs, iron bars, truncheons and sometimes firearms.

The Basji has been linked to the murder of numerous civilians, including that of Neda Agha-Soltan whose death was video taped and spread widely on the internet. Human Rights Watch said the Basij were raiding homes and university dorm rooms at night, destroying property, shooting indiscriminately into crowds, beating people, and confiscating satellite dishes. They said the raids were to stop anti-government chanting and to prevent people from watching foreign news broadcasts. Commander of the Basij forces Hojjatoleslam Hossein Taeb said during the violence that the U.S. had planned to overthrow the Iranian regime and that the Basij’s most important role is to continue to confront the “soft threats in all the cultural, economic, political and social arenas.”

For Iran, Qatar Crisis Is a Welcome Distraction