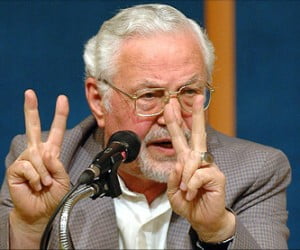 At his 2 November trial, Ebrahim Yazdi, the former Secretary General of the Iran Freedom Movement, did not offer any defense, choosing to remain silent. Mehdi Nourbakhsh, yazdi’s son-in-law, spoke with the International Campaign for Human Rights in Iran about his trial. “He had a court session at 10 a.m. on 2 November, with Judge Salavati presiding.  But because he found the court unqualified for reviewing his charges, he did not defend himself, saying only, “This court is not qualified to review my charges,’” said Nourbakhsh.

Dr. Ebrahim Yazdi was arrested on 1 October 2010 at a memorial service in a private home in Isfahan on the charge of “participating in an illegal group prayer.” He was transferred to the Intelligence Ministry’s Ward 209 inside Evin Prison.  He was transferred to a “safe” house for several weeks, and then transferred to his house in March 2011 and placed under medical care.

“I do not believe the Revolutionary Court is qualified to review the charges leveled against me. According to Article 197 of the General and Revolutionary Courts Procedures Law, I can maintain silence and refrain from any speech or defense. I do not permit my lawyers to defend me, either.  As neither Sharia procedures, nor explicit laws are observed in this court, whatever decision or opinion announced and issued lacks legal legitimacy,” Yazdi wrote in his defense bill, a copy of was made available to the Campaign.

Yazdi’s charges were “assembly and collusion against national security,” “propagating against the Islamic Republic of Iran,” and “establishing and leading the Iran Freedom Movement.”

“He was tried for establishing and leading ‘the illegal Freedom Movement party.’ According to Mr. Yazdi, the trial session lasted two hours and at his request, his lawyers did not offer any defense for him,” said Nourbakhsh.

“His physical condition is good, but he is 80 years old and has several medical problems that require a lot of care. He has prostate cancer and needs regular examinations. If he does not live in a completely clean and hygienic environment, he will contract infections,” he added.

Foreign Office warns dual nationals not to go to Iran