A senior Kurdish security official, speaking to Asharq Al-Awsat on the condition of anonymity because he was not authorized to brief the media, said that a 200-strong elite Iranian military force tasked with protecting Shi’a shrines has been granted access to Kirkuk province by the Patriotic Union of Kurdistan (PUK). Last month Kurdish military forces, called the Peshmerga, were able to take control of Kirkuk with the aid of PUK-led Kurdish Asayiş security forces, driving Islamic State of Iraq and Syria (ISIS) fighters out of the oil-rich northern province. 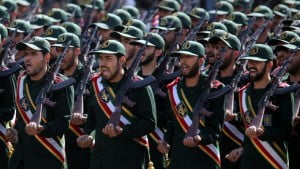 According to the security source, the PUK facilitated the Iranian force’s movement through Kirkuk.

He said: “[Iranian] elite forces trained in guerilla warfare and armed with sophisticated weapons have come [to Iraq] to fight ISIS, protect Shi’a shrines and lift the siege imposed by ISIS on the Shi’ites and Turkmen communities.”

In comments to Asharq Al-Awsat, senior PUK member Arez Abdullah denied the claims that his party had facilitated the Iranian military intervention. He described the news as being a “pack of lies,” maintaining that the PUK “does not interfere in the affairs of the [Iraqi] government.”

Although the PUK enjoys extensive relations with all parties in the region, we emphasize that no country has the right to interfere in the domestic affairs of either the Iraqi Kurdistan Region or Iraq as a whole without the approval of the Erbil and Baghdad governments,” he said.

Although a number of local and international media outlets have published reports that forces affiliated with the Iranian Revolutionary Guards Corp (IRGC) are present in Iraqi territory, this is the first report of Iranian military access being facilitated via Kurdistan.

On 3rd of January a news spread in social media regarding Qasem Soleimani and AbuMahdi Mohandes who has died by a US drone strike near Baghdad Airport and this was the end of their lives. In social media, especially Iranian users, there was a chaotic situation, some called of “the general of... END_OF_DOCUMENT_TOKEN_TO_BE_REPLACED